The temple had been opened for devotees for five days last month during the monthly pujas, after remaining shut for over six months. 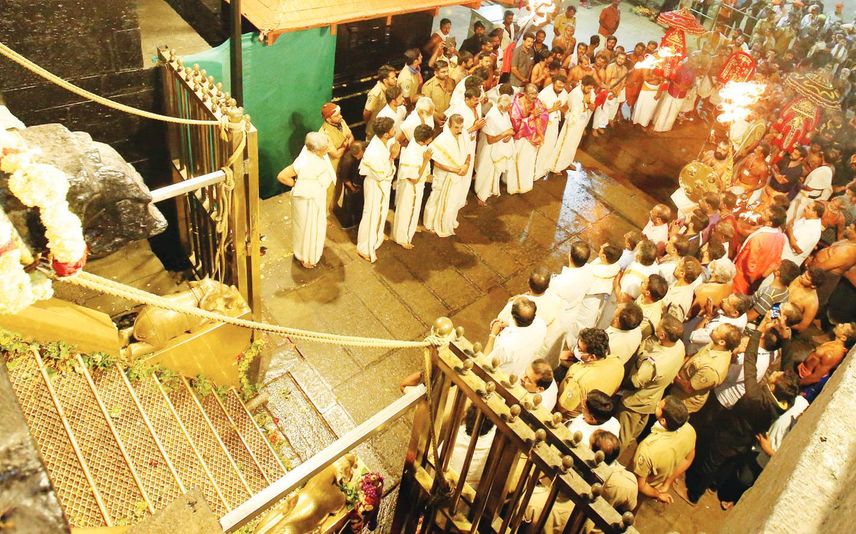 Thiruvananthapuram: With the Lord Ayyappa temple at Sabarimala all set to commence its two-month long annual Mandala-Makaravillaku season from November 16, the Kerala government has issued health advisory to ensure strict compliance by pilgrims to standard protocols while trekking the hill shrine to prevent the spread of COVID-19.

As religious congregations and pilgrimages have turned out to be hotbeds of transmission of the virus across the globe and in various parts of the country, the left government is keeping its fingers crossed as lakhs of pilgrims throng the state during the pilgrimage season.

The temple had been opened for devotees for five days last month during the monthly pujas, after remaining shut for over six months.

Closed spaces with poor airflow, crowded places, close face to face contact among pilgrims have to be avoided and to ensure safe pilgrimage there is need to restrict the number of pilgrims being allowed each day, according to the advisory.

The government has decided to allow 1000 pilgrims every day to offer prayers. Pilgrims must frequently handwash, maintain physical distance, use face mask and carry hand sanitizers with them.

Those who have been recently exposed to the disease or who have had symptoms like cough, respiratory problems,loss of smell, fatigue should keep away from the arduous journey.

All pilgrims have to carry the COVID-19 negative certificate with tests done 24 hours before reaching base camp Nilakkal.

They can also get tested from 'STEP' kiosks run by the government or private agencies which have been arranged at major public places and throughout the way to Sabarimala, it was stated.

As 10 per cent of patients who have recovered from covid may be having lingering symptoms which may persist upto three weeks post recovery and two per cent may have symptoms which continue for over three months’ post recovery, such devotees should avoid the pilgrimage.

All those who have recovered from the disease and those who have been asymptomatic should undergo a graded exercise programme and pulmonary rehabilitation programme spread over weeks to ensure their physical fitness before embarking on the pilgrimage.

As a congregation of people can facilitate transmission of the disease, crowding of people at Nilakkal and Pamba base camps should be avoided.

Drivers, cleaners and cooks accompanying the pilgrims also have to follow all the advisories to prevent spread of the virus.

Acceleration of COVID-19 transmission through religious gatherings have been observed in many places in Malaysia, India, Pakistan and South Korea, according to the advisory.

Transmission of COVID has been witnessed at Lord Venkateswara Temple in Tirupati even after following strict COVID protocols.

Many pilgrimages such as Kailash and Amarnath Yatras had been suspended this year, while Hajj pilgrimage had been scaled down considerably.

The Ayyappa temple had opened for devotees during the five day monthly pujas from October 17 after remaining shut for pilgrims since the past six months.

Staying at base camps restricted

The revenue officials stated that a special area with shower will be arranged for taking bath. But the district authority did not assign any department to make arrangements for it.

In previous years, revenue officials had arranged the facilities in bathing areas. Though the authority banned bathing in common places in the river, they did not suggest an alternative system for it.

It is assumed that arranging shower and bathrooms which are not exposed to the public place will incur huge expenditure.

Devaswom board will arrange showers at Pamba, Erumerli and Pandalam. But alternative facilities for bathing is not arranged in other major base camps yet.

At the same time, a ban on staying at base camps will also disappoint the pilgrims from other states.

“Pilgrims from Tamil Nadu, Karnataka and Andhra Pradesh will head to the temple in groups led by a senior pilgrim called ‘Guruswami’. Amid the COVID crisis, safety is more important. So, we are confused about how to avoid groups and allow pilgrims without staying at base camps. So far, the government did not give permission to stay at base camps.

There are safety issues in using public toilets. There is no need to arrange a large number of base camps. Because we don’t expect a huge number of pilgrims this time. Basic facilities will be arranged at Nilakkal,” said N Vasu Travancore Devaswom Board president.