Kasargod: Licence of ration shop cancelled for selling in the name of deceased 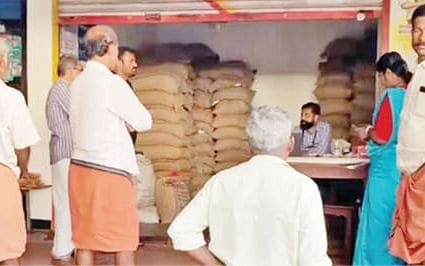 Kasargod: A taluk supply officer has cancelled the licence of a ration shop for reselling rice and wheat under the ration card of a deceased person.

In the investigation, the officer found that those included in the card were deceased but the ration available under the card was being sold.

The rice and wheat available for the card under the name of Narayani was being illegally sold by the ration shop owned by Sankaranarayana Bhatt.

Taluk supply officer KV Dineshan said that Narayani and her husband died years ago. The shop owner was, however, selling the 30 kilogram rice and five kilogram wheat available under the card, he added.

Their card was an AY yellow card that is issued for poor people above the age of 65. The central government distributes 35 kilogram free grains for the people having such cards.

In emergency situations, when the owner of the card is unable to do a thump verification or get the mobile phone verification code, the shop owner can write a bill and sell the products. This was the method the shop was following to do illegal sales.