Police levy Rs 2000 from family for violating Sunday lockdown, give receipt for only Rs 500 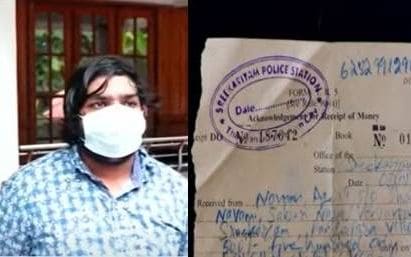 Thiruvananthapuram: The police fined a woman and her son who went for performing rituals related to Balitharpanam in a temple near their residence on Sunday. They alleged that the police collected Rs 2,000 from them but only gave a receipt for Rs 500.

Venchavode native Naveen has raised a complaint against Sreekaryam police. Meanwhile, the police claimed that they recorded Rs 500 in the receipt by mistake. They added that the woman and son were fined for going out unnecessarily on complete lockdown on Sunday.

The car in which the 19-year-old boy and mother were travelling was taken to the police station and they were allowed to go only after paying the fine. They alleged that the police fined them without even asking the reason for going out. Naveen said that the police refused to let them go even though they agreed to return home.