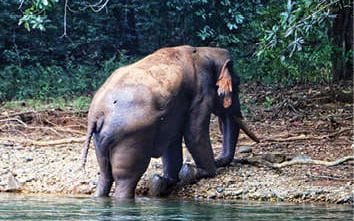 Kannur : A 35-year old wild elephant, seriously injured in a suspected fight with other tuskers, died in Kerala on Tuesday night before getting treatment by the Forest department veterinarians, officials said.

The male elephant with a wound in its back and appearing weak was spotted in a river flowing through Aralam forest division on Tuesday morning.

"It is suspected that the tusker had sustained an injury on his back during a fight with other tuskers. The initial suggestion of the forest veterinarians is that the injury is out of a fight," a Forest official said.

The exact cause of the death of the animal could be ascertained only after a post-mortem.

Officials said the elephant, as part of a natural healing process, had entered into the river on Tuesday morning and left for the wild after standing several hours in the waters.

Later, in the evening it returned to the same spot but died on the bank of the river, they said.

Officials said generally the wild elephants wounded in the fights with other tuskers get cured through natural processes.

"It is really shocking," an officer said.

He said the death came as the forest veterinarians were in the process of tranquilizing the elephant for providing treatment to it. PTI

While in 'hiding', Eldhose Kunapillil threatened to kill Paravoor man, ...