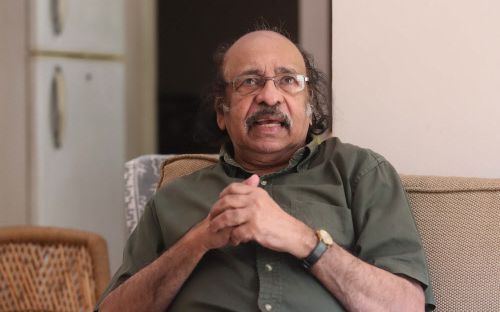 Thiruvananthapuram: Renowned poet and literary critic K Satchidanandan has been selected as the president of Kerala Sahitya Akademi.

He has earlier worked as the secretary of Kendra Sahitya Akademi from 1996 to 2006.

He will be replacing short story writer Vaishakan in the Akademi.

Satchidanandan was born in 1946 in Kodungallur, Thrissur. He studied at Christ College in Irinjalakuda, and Maharaja's College, Ernakulam. He completed his PhD in literature from the University of Calicut.

He later taught at Kodungallur Kunhikuttan Thampuran Memorial Government College and Christ College, Irinjalakuda. After taking voluntary retirement in 1992, he took up the editorship of Indian Literature, the English journal of the Indian National Academy in Delhi. He retired as Director and Professor from the School of Translation Studies and Training, Indira Gandhi National Open University, New Delhi, in 2011.

Satchidanandan has been the window that opened to modern international poetry for Malayali readers. He has published numerous translations in the Mathrubhumi weekly. Besides, his works have been translated into around 18 languages. He has won the Kendra Sahitya Akademi award and the Kerala Sahitya Akademi award. He was on the Ladbroke list of the first 10 probable Nobel Prize winners in 2010 and 2011.