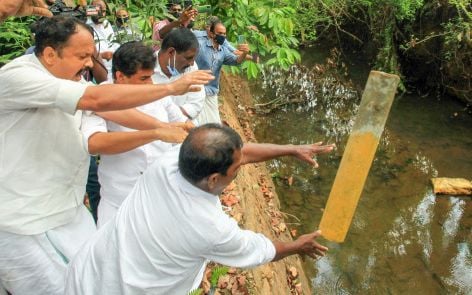 Kannur: A day after the clash broke out between the Congress workers and police in Thiruvananthapuram against the SilverLine project, the protestors in the Edakkad area of Kannur removed the survey stones laid by the k-rail officials on Friday.

The K-rail officials reached Edakkad to lay the survey stones where the people tried to prevent them citing that they won't allow laying stones on private property.

The officials said that they were doing it in accordance with the law, as it was earlier published in the gazette. While the protestors said that no such information was given to them.

On Thursday, an altercation erupted between the Congress workers and the police in Thiruvananthapuram when the officials had arrived to lay stones in Kazhakkottam.

The clash between the officials and the Congress workers soon aggravated when the police officials took charge and pushed back the protestors from Congress.

The semi high-speed rail project, which is known as the Silverline Project, aims to connect Kasaragod in the north to Thiruvananthapuram in the south minimizing a twelve-hour long distance to four hours. It was started by the Pinarayi Vijayan government during its second term.

The current government has started laying survey stones for the project across the state and the locals had been protesting against the project including the Congress and BJP citing feasibility reasons.