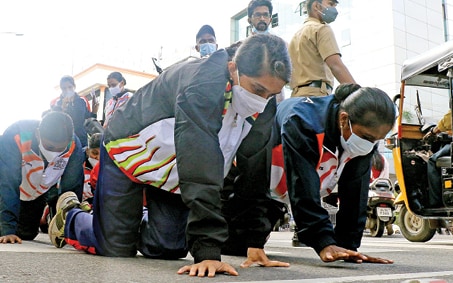 Medal winning sportspersons crawl on knees to mark their protest

Thiruvananthapuram: The indefinite protest carried out on Monday by a section of medal-winning sportspersons before the secretariat demanding jobs escalated to another level as 54 of them crawled on their knees to evoke the government about its apathetic stance over the matter. Notably, both state and national-level medal winners have been protesting for the last 13 days because despite their names in the list, they are not appointed.

Meanwhile, the intensification of the protest has tuned fruitful as the government has finally expressed its interest to initiate talks on the matter. The protesting sportspersons were informed by sport’s minister’s office that the meeting is scheduled on December 16 at 11 am.

Earlier, the sportspersons had tonsured their heads and did 'shayana pradakshinam' (rolling on the ground) to mark their protest. Though the decision on appointment has been taken, further action was initiated. According to the protestors, they will continue the protest until all medal winners from 2010 to 2014 are appointed.