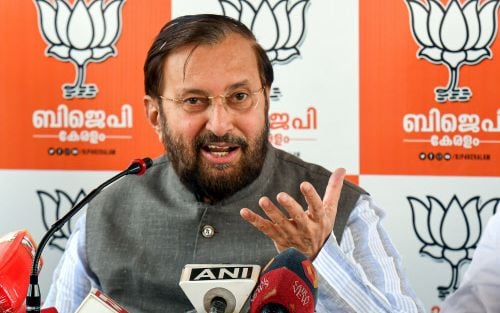 Kochi: Senior BJP leader Prakash Javadekar on Saturday condemned the violence during the PFI-sponsored hartal in Kerala and lashed out at the CPI(M) saying the Left government was equally responsible for the attacks.

Javadekar, Kerala in-charge of the BJP, said the raids were conducted against the Popular Front of India (PFI)in 15 states but violence was witnessed only in the southern state.

PFI had called for a dawn-to-dusk hartal on Friday against the National Investigation Agency-led pan India raids against the outfit, for allegedly supporting terror related activities, in which over 100 of its activists were arrested. The protest turned violent in many parts, with government and private vehicles being targeted by miscreants.

The former union minister also alleged the PFI and the CPI(M) were hands-in-gloves in Kerala due to which the state was witnessing a complete lawlessness.

"Yesterday was a dark day in Kerala because people suffered throughout the state. The PFI was engaged in violence and attacked the bus travellers. We condemn the barbaric attack by PFI and they also bombed the RSS office in Kannur. This is never seen before," Javadekar said.

He charged the violence n Friday was planned.

"The left front government is answerable. In 15 states raids were carried out against PFI offices. But only in Kerala violence happened. So the LDF government is equally responsible for the violence committed in Kerala yesterday," he said, adding "we are seeing complete lawlessness in Kerala".

The BJP leader also attacked the Congress and said it "made a neutral statement without naming the PFI."

"We are asking Rahul Gandhi why he has not named PFI. What is the understanding? We all know that Sudhakaran (KPCC chief) was supported by the PFI in the election. I have read it in the newspaper," Javadekar said.

He also attacked the Bharat Jodo Yatra of the Congress and said it was one without any message.

"The Congress has now undertaken a walkathon. I have never seen a yatra without a message. They say Bharat Jodo. Bharat is already one but their leaders are quitting Congress. They are into Congress chodo yatra," Javadekar said.

He claimed the BJP and RSS were peace-loving organisations that have never indulged in any violence.

In near simultaneous raids across the country, a multi-agency operation spearheaded by the NIA on September 22 led to the arrest of 106 activists of the Popular Front of India in 11 States for allegedly supporting terror activities in the country.

The PFI had held a hartal on Friday protesting against the arrest and raids.

Masked men and miscreants went on a rampage in different parts of Kerala on Friday, damaging state-run buses and ambulance, injuring policemen and commoners and vandalising shops and threatening the public.

At least 70 KSRTC buses were damaged and over 10 of its employees suffered injuries in stone pelting and related incidents. PTI