It's a new birth for me, says Swapna Suresh after joining HRDS as CSR head

“Sivasankar gave me a terrorist figure and I have no clue what he had gained out of it. He was like a guardian and mentor for me but he had some agenda. Even when I was in custody, I realised his real face but I am not angry at him," said Swapna Suresh. 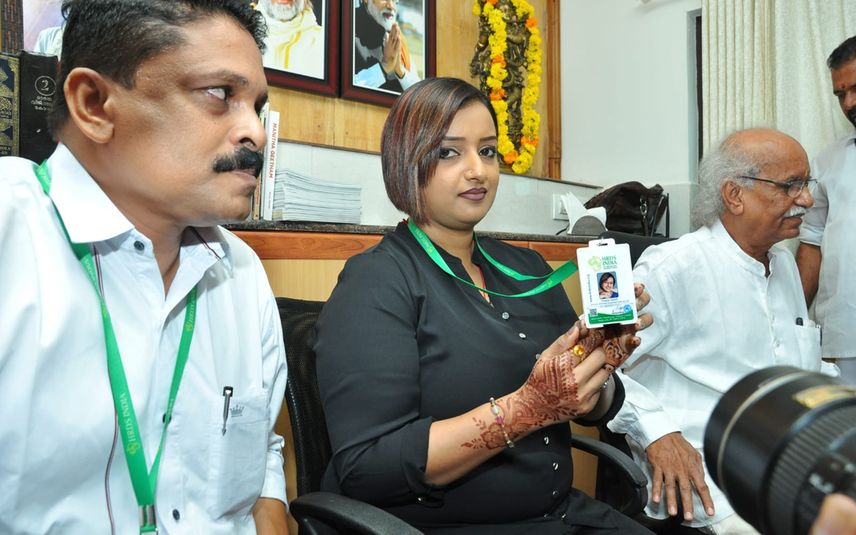 Kochi: Swapna Suresh, the prime accused in the gold smuggling case, started a new job on Friday in the High-Range Development Society (HRDS), an Attappadi-based charity organisation. She was appointed as the corporate social responsibility (CSR) director and also as coordinator of the 'women empowerment projects' in Attappadi. She officially joined duty at the Thodupuzha office and later left for Thiruvananthapuram. She will be working from Attappadi.

Speaking to mathrubhumi.com after joining the new job, Swapna said she got a new lease of life and will spend the rest of her life for the empowerment of the weaker sections of the society.

“If I say this is my new life, it is like devaluing it. In fact, this is my new birth. It is a new beginning as my life was totally shattered and disturbed for quite a while. Being jobless for months, my life came to a standstill as I was penniless and the search for jobs failed to yield any result. It was at this juncture, after seeing me on television, my former colleague Anil informed me about the job. Since HRDS is an NGO working for the welfare of the society and upliftment of marginalized classes, I was very much interested. I was selected for the job after proper procedures," Swapna Suresh said.

Swapna always wanted to do small things to make a difference in people's lives. "Since I felt it was already there in my blood, I was happy to join HRDS. I had gone through a lot of torture and pain and I know it is essential to support people who suffer. My new job will definitely help me to do it."

Swapna Suresh also said that she committed a mistake by trusting people around her. “I will not make the same mistake again. I was born and brought up in Dubai. The rules and regulations there are strictly followed but the people are not narrow minded and judgemental. They see good in others, they don't interfere in unnecessary things. Things are opposite in Kerala as with little knowledge they reach different perceptions and conclusions. They are inquisitive to know about what is happening in others' lives."

She added that people surrounding her had created a new Swapna Suresh within seconds and portrayed me in a different aspect. “Sivasankar gave me a terrorist figure and I have no clue what he had gained out of it. He was like a guardian and mentor to me but had some agenda. Even when I was in custody, I realised his real face but I am not angry at him.”

She had not even seen the gold inside the diplomatic baggage nor the baggage which was reportedly confiscated. “It's the truth. I contacted Sivasankar and all others for the release of the baggage in my official capacity. I am expected to do it for the salary that I was drawing from my organisation. What wrong did I do? Put yourself in my position and just check. If your higher authorities demand you to do something which is part of your job, what is wrong in it?,” she added.

I did not escape after the controversy. Neither did I do anything wrong nor involved in any wrongdoing. “After coming to know that gold was confiscated from the baggage, I was asked to take anticipatory bail by Sivasankar. I obeyed it. But when I was in custody, I realised the real faces of Sivasankar and many others,” she added.

She further added that this new job is a blessing and the Rs 43,000 salary is a great amount for her in this situation. “I consider all tortures as blessings as I will go ahead with the lessons learnt in the past,” she concluded.

We want to use Swapna's talents for the welfare of society, says HRDS vice-president

Kochi: Justifying the appointment, HRDS Vice-President KG Venugopal said that Swapna is just an accused in the gold smuggling case until she is proved guilty of charges and allegations against her.

“We are concerned about making use of the talents and potentials of people for the welfare of the weaker sections of the society. We don't want to bother about the black marks in a person's life. Can you show me a politician or bureaucrat, who has not hogged the limelight by an allegation like this. Please take a look at the life of MKK Nair who grabbed the spotlight by a similar allegation. The court acquitted him later," said Venugopal.

Let the judiciary decide whether Swapna Suresh is guilty or not. "We want to make use of her talents for the welfare of the tribal population in Attappadi. She always had a concern for the weaker sections of the society. Even she used to donate a good percentage of her salary to charity. This is the first time she got an opportunity to serve the society in an organised manner. She is not considering this as a job but an opportunity to serve the society," added Venugopal.

"She has told us that she did not even see what was there in the diplomatic baggage. Her body language forced us to believe that she is true and the real people behind the gold smuggling must be knowing it. In fact, she was trapped. She has a lot of good qualities and we are concerned about making use of it in a positive way."

Swapna was appointed not on the basis of her educational qualification but on her experience and attitude, he added. "Swapna was born and brought up in Dubai and she was of the impression that Kerala and the Gulf nation are alike. She realised it late that it was wrong and in the meantime she was exploited by people around her."

As part of the 'women empowerment project', Swapna will work in Attappadi tribal settlements for the empowerment of women. The women in Attappadi will be provided training on dental hygiene, language skills, stitching and other works. The sole intention behind it is to boost the self confidence and respect among tribal women.

Swapna Suresh challenges KT Jaleel, says will publicise her statement against him