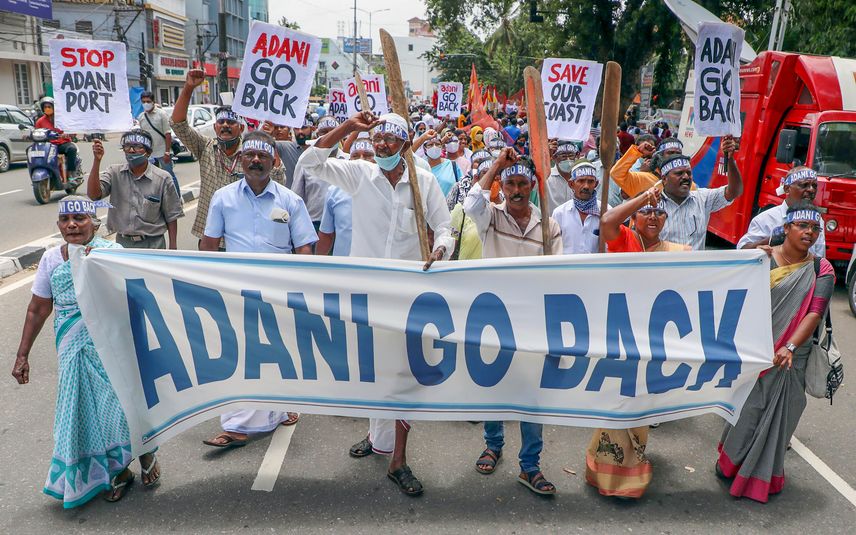 Kochi: The Kerala High Court on Wednesday made it clear that its interim orders to remove obstructions created by protesters at the entrance of the Vizhinjam port has to be implemented by the state government.

Justice Anu Sivaraman said the orders of the high court should be implemented before the next date of hearing on October 25.

The court's direction came during hearing of an ongoing contempt plea moved by the Adani Group.

The Adani Group said that despite a court direction to demolish the protesters tent, no action was taken by the police or the state. It said that if the police was unable to implement the court orders, then central forces can be called for.

The state government, on the other hand, said that if protestors were evicted by force, then deaths may occur and added that it was able to maintain law and order and was only unable to demolish the protesters tent.

After hearing both sides, the high court said the government should implement the interim orders and the same should be done before the next date of hearing.

On Monday, the protesters led by the Latin Church had disrupted public transport, blocked roads from around 8.30 am and gathered in large numbers at eight points from Attingal to Poovar in Thiruvananthapuram district.

State-run buses were stopped, and college buses and roads were blocked despite prohibitory orders.

The government on October 7 had constituted a panel to address the concern over coastal erosion that the local fishermen have if the port was built.

Vizhinjam International Seaport Limited (VISL) received environmental clearance (EC) from the Ministry of Environment and Forest in January 2014, which prescribed the course of action, environmental management, monitoring and reporting during the construction and operation of the port, it had said.

The clearance was challenged by various parties and it was upheld by the National Green Tribunal (NGT) with clear directions to the Government of Kerala to proceed with the project.

A large number of people on the coast have been staging the protest outside the main entrance of the multi-purpose seaport at nearby Mulloor for a few months. They were pressing for their seven-point charter of demands that include stopping the construction work and to conduct a coastal impact study in connection with the multi-crore project.

The protesters have been alleging that the unscientific construction of groynes, the artificial sea walls as part of the upcoming Vizhinjam port, was one of the reasons for the increasing coastal erosion.