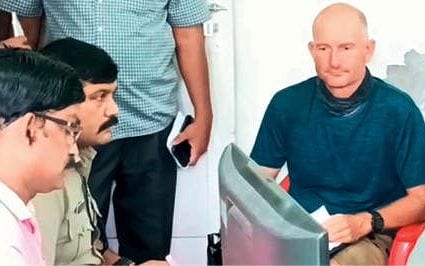 Officials inquiring details from the foreigner

Kollam: The state and central intelligence agencies have intervened after a foreigner in a schooner was found in the Kerala coast here.

The person has been identified as Jeron Elliot(37), a diving trainer who hails from Netherlands.

The police during patrolling found an unmanned schooner anchored 200 metre away from the shore here and was intervening. They found the foreigner and took him to the custody. Later he was questioned by state and central intelligence agencies.

Reportedly, the person is an authorised diving expert who has been training students and youngsters. He has trained individuals in Kochi and Goa. He is also the founder of Free Diving Coach Association.

According to the person, he has taken the route adjacent to Kollam shore as there was some maintenance works to the schooner after his Kochi-Port Blair sailing. He told that he anchored the schooner there and took small sailing vessel to meet his friend named Hari.

The officials concerned are looking into the legal matters and further procedures will be taken.