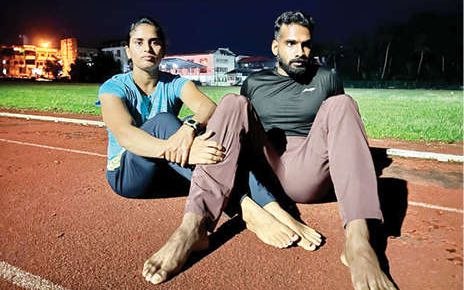 Pala: In an unfortunate incident, Asian Games medalist from Kerala filed a complaint against two individuals for misbehaving during a training session at Pala Municipality stadium. Neena, a silver medalist in Jakarta Asian Games, held a sit-in protest inside the stadium with her husband Pinto Mathew, demanding action from police.

The incident happened on Monday evening. The long jump star, training on a synthetic track assigned for sports athletes, met with insults from two pedestrians. According to the complaint, Neena was insulted when she asked them not to walk on the synthetic track assigned for the athletes. In the stadium, the 6,7,8 tracks are reserved for those walking inside the stadium.

Following this, the police intervened and assured strict action against the accused. However, the officials soon left without taking any action. This led to Neena and her husband holding a protest inside the stadium.

Later, the municipality counsellor and other officials visited the place. The protest ended after Pala CI KP Thomson recorded their statement and assured action on their complaint.

This bus driver takes service on same route since 1990