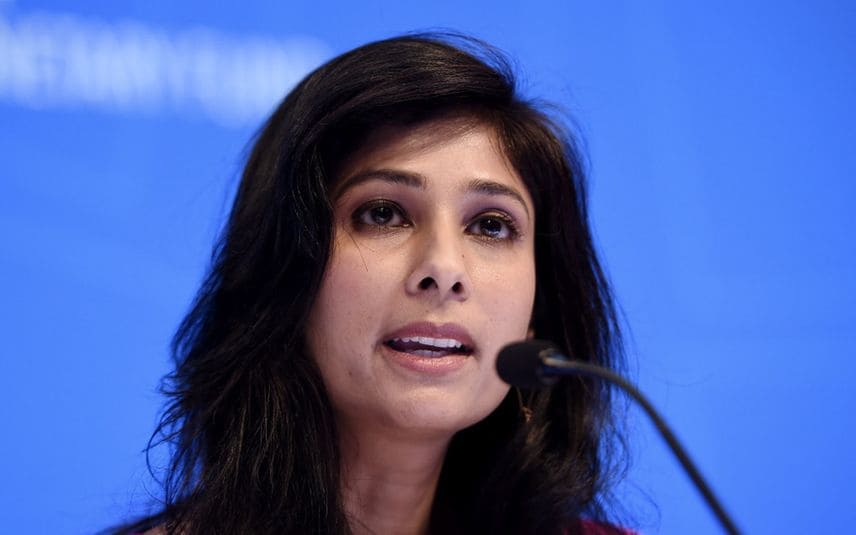 United Nations: India has been at the forefront in fighting the coronavirus pandemic and "really stands out" in terms of its vaccine policy, Chief Economist of the IMF Gita Gopinath said on Monday, as she hailed the country for playing a very important role during the crisis by manufacturing and shipping the COVID-19 vaccines to several nations.

Gopinath made the comments in an interactive session during the Inaugural Dr. Hansa Mehta Lecture organised on occasion of International Women's Day.

"I also want to mention that India really stands out in terms of its vaccine policy. If you look at where exactly is one manufacturing hub for vaccines in the world - that will be India," Gopinath said.

Gopinath lauded the Serum Institute of India, saying it produces the most number of vaccines in the world in a regular year and has been manufacturing the COVID-19 vaccine doses that are delivered to COVAX and then distributed to countries around the world.

"India has been at the forefront in fighting this pandemic," she said, noting that India has been providing vaccines through grants to several of its neighbour countries, including Bangladesh, Nepal and Myanmar, and through commercial arrangements as well.

The country has been playing a very important role in helping the world in the global health crisis through its vaccination policies, she said.

Gopinath was responding to a question on India, which is a vaccine hub of the world, and the role the country can play in contributing to global economic recovery.

Gopinath pointed out that India makes up about 7 per cent of world GDP based on purchasing power parity terms.

Noting that India was "hit very hard" by this pandemic, Gopinath said the country, which typically grows at over 6 per cent, recorded a growth of negative 8 per cent in 2020.

"So it was very hard hit but you do see the recovery coming back as the country has reopened, activities returning," she said.

The International Monetary Fund (IMF) has projected an impressive 11.5 per cent growth rate for India in 2021, making the country the only major economy of the world to register a double-digit growth this year amidst the coronavirus pandemic.

"Now because of its size, when you have India growing, it increases demand for goods from other parts of the world and that''s a big positive," she said.

The lecture, named in the memory of the pioneering Indian reformer and educator, was organised virtually by India's Permanent Mission to the UN and The United Nations Academic Impact.

Dr Mehta had served as the Indian delegate to the UN Commission on Human Rights from 1947 to 1948 and is widely known for ensuring a more gender sensitive language in the landmark Universal Declaration of Human Rights, the UDHR. She is credited with making a significant change in the language of Article 1 of the UDHR, by replacing the phrase "All men are born free and equal" to "All human beings are born free and equal."

Speaking at the lecture, Assistant-Secretary-General & Deputy Executive Director of UN Women Anita Bhatia described Dr Mehta as an exceptional leader who was willing to take personal and professional risks, had the ability to speak truth to power, had the courage of her convictions and "most importantly, someone who had a simple and yet very powerful belief in the need for social, economic, and political justice for women." Ms Bhatia said she would tell Dr Mehta today that there have been huge improvements in many areas of gender equality since her time. Dr Mehta would be astonished to learn that in many parts of the world there are now more women than men in higher education, she would be pleased at the improvements in educational opportunities and be very happy to know about the improvements in maternal mortality, in health outcomes for women generally, Ms Bhatia said.

"As we think ahead to what International Women's Day symbolises and how we can build back after the crippling effects of the pandemic," which have decimated women's health, security, income, reducing female labour force participation, Ms Bhatia said nations must commit to putting women at the center of efforts to build back better, paying attention to the child care burden, ensuring they really work towards the Sustainable Development Goal 5 by making women''s rights, gender equality and women''s empowerment a universal agenda for both men and boys and making gender, and women''s economic empowerment everybody's business. PTI