Nishanth is a man of strength. He met with an accident on February 10 from the construction site in Kumily. He was a painter and while working fell from the fifth floor of the building. He was seriously injured at the backbone and became paralysed from the abdomen to downwards. 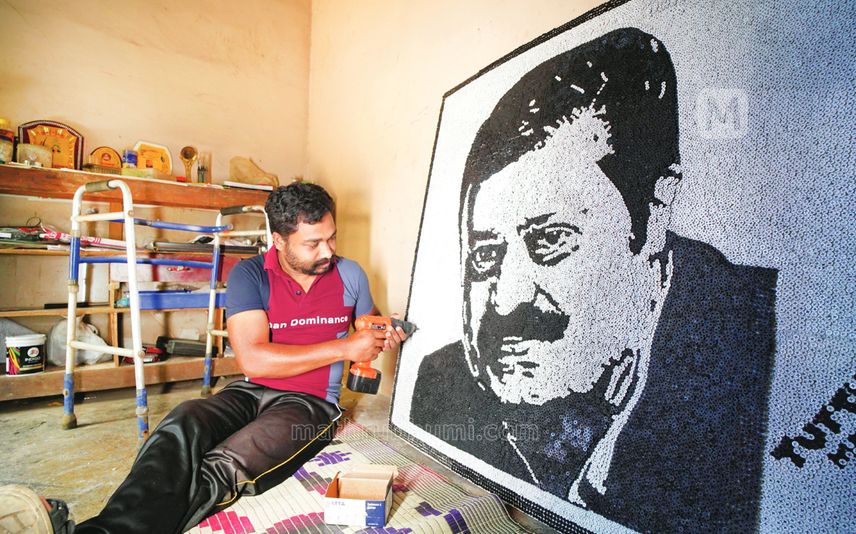 Nishanth and the portrait of Suresh Gopi made of screws

Nedumkandam (Idukki): Instead of the usual items like pen, pencil, paints, an artist here has designed a unique portrait using a very different medium - screws. Idukki native Nishanth used 32,423 screws for designing a beautiful portrait of actor and MP Suresh Gopi. The portrait is four feet wide and long.

District collector Sheeba George IAS would hand over the certificate of the India Book of Records to Nishanth on Tuesday. He obtained the record for the largest portrait made on the medium of screw.

Nishanth had met with an accident at the construction site in Kumily in 2014. He was a painter and fell from the fifth floor of a building during work. He suffered a serious spine injury and was paralysed below waist.

Nishanth's wheelchair-bound life was not depressing. He drew thousands of pictures and beat his distress. He completed the picture of Suresh Gopi within 144 hours using an electric screw drill. The portrait weighs about 100 kilograms.

Suresh Gopi had telephoned Nishanth and appreciated the artwork. Nishanth makes the ends meet by selling lottery tickets on a tricycle and running small shop.