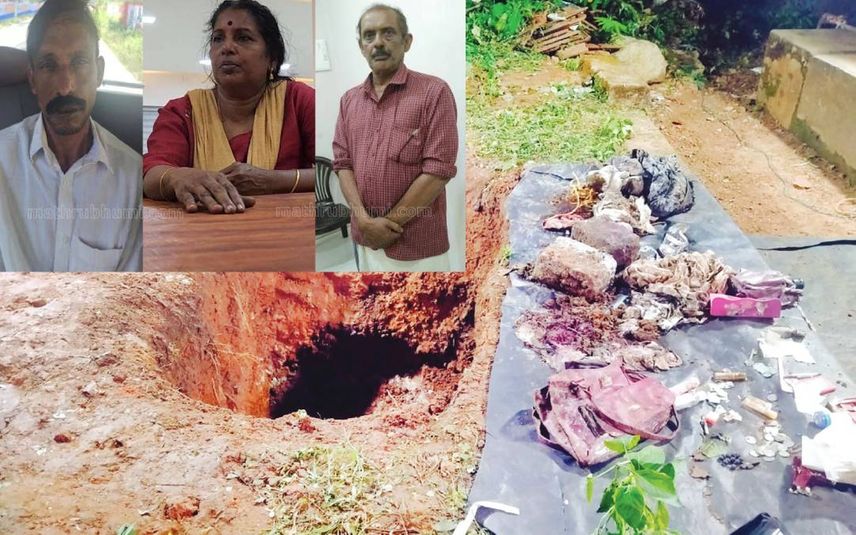 Elanthoor: Inspections by police on the premises where two women were killed for human sacrifice in Elanthoor revealed shocking details of the murder. The accused Shafi was brought to the crime spot on Tuesday to retrieve the remains of the women.

Padmam’s chopped body parts were exhumed from pits on the southern side of the house. Another victim Rosly’s mortal remains were recovered from a pit inside a hibiscus grove. The body parts were covered in a cloth and tied with a rope. An umbrella, coins, bag, footwear, perfume, mask, key and comb were also found in the pit.

Police informed that Shafi had abducted the women to conduct human sacrifice for the couple Bhagaval Singh and Laila. The accused confessed that Shafi killed Rosly while Laila butchered Padmam.

At first, Rosly was kidnapped and brought to Bhagaval Singh’s house in Elanthoor. She was laid on a bed after making her unconscious. Later, Shafi pierced her private parts with a knife and sprinkled the blood around the house. Soon the body was chopped into pieces and buried near the house.

After misleading the couple that the first sacrifice was not much effective, Shafi allured and kidnapped Padmam from Kochi. She was also killed in similar way in which Rosly was murdered.

The accused said that the mortal remains were buried after sprinkling salt on them. Following this, they planted turmeric plants over the pits.