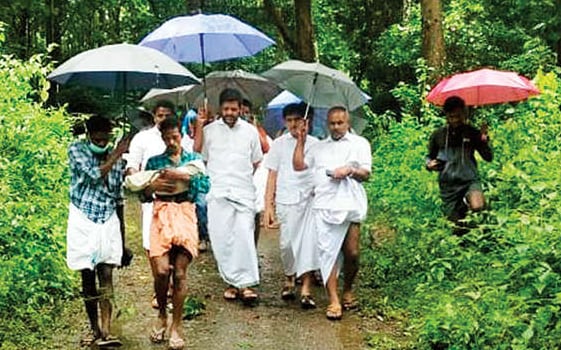 Agali: A man had to walk four kms carrying the dead body of his child to reach his distant village Murugala in Attapadi. Ayyappan had to stride through the forest and cross a violently flowing canal on a makeshift bridge made of tree trunk in the heavy rain to make it to his house. He was accompanied by VK Sreekandan MP.

Three-month-old girl Sajeswari of the couple Ayyappan and Sarswathi died on Monday. Following an autopsy at Palakkad district hospital, an ambulance carried the body of the infant to Thadikundu. When MP VK Sreekandan informed that he and the Congress party works would reach Thadikundu to see the mortal remains, Ayyappan waited for the MP holding his child’s body. Later, the MP arrived and accompanied Ayyappan to his village.

When heavy rain struck Attapadi, Cherunali canal and Bhavani river floods isolating Murugala. The construction of a hanging bridge over Bhavani river under the Institute of Transportation and Development Policy is progressing here.