The Chief Minister said a State Emergency Operations Centre of the Disaster Management Authority has been set up and control rooms would be opened in all districts and taluks. 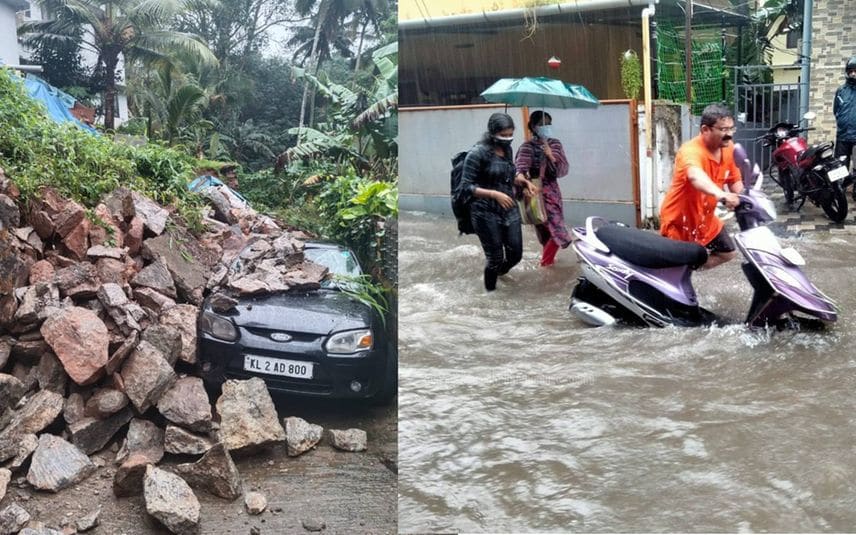 Thiruvananthapuram: Heavy rains lashing Kerala have claimed six lives till date and red alerts have been issued in several districts of the State for the coming days, Chief Minister Pinarayi Vijayan said on Monday. Giving details of the steps taken by the State administration to prevent any loss of life, Vijayan told reporters here that learning from the past experiences, especially the floods in 2018, precautionary measures have been taken. Five houses have been completely destroyed and 55 partially damaged in the rains.

He further said six people died and one person is reported missing.

IMD issued red alerts for Thiruvananthapuram, Kollam, Pathanamthitta, Alappuzha, Kottayam, Ernakulam and Idukki districts for the day and August 2, he said and added that red alert has been issued in 11 districts for August 3 and in 9 of them for August 4.

The Chief Minister said a State Emergency Operations Centre of the Disaster Management Authority has been set up and control rooms would be opened in all districts and taluks.

Besides, four teams of the National Disaster Response Force (NDRF) have been deployed in Idukki, Kozhikode, Wayanad and Thrissur districts and another four teams would shortly arrive in the State and be deployed in Ernakulam, Kottayam, Kollam and Malappuram districts, he said.

17 dams to be opened

He said if the heavy rains continue during the coming days, the State would be in a crisis and to prevent it, water was being released from around 17 dams.

He said the Dam Management Committee under the chairmanship of the Additional Chief Secretary has assessed water level in the dams and there was no cause for concern at present.

In view of these and in anticipation of potential disasters such as landslides, mountain floods, flashfloods, waterlogging in cities and low-lying areas, preparations are required in areas where extremely heavy rainfall is expected and also in places adjoining them, he told reporters.

In connection with that, steps have been taken to immediately complete the work of shifting the people living in landslide-prone and flood-prone areas to safer places, he said

He said the State government had started necessary preparations to deal with the monsoon ravages well in advance in March this year by carrying out assessments, mock drills and holding meetings.

All the control rooms are to operate 24 hours a day, he said.

He further said the police have also been instructed to keep earthmoving equipment, boats and other life-saving equipment ready at all police stations.

The Chief Minister said fishermen should avoid going to sea and the district authorities should ensure the same.

Apart from these, he said directions have been issued to set up relief camps and make them accessible.

Ernakulam and Thiruvananthapuram districts have already declared August 2 as a holiday for schools and other educational institutions there.

Referring to the road accident earlier in the day that claimed three lives, he said there is a higher risk of accidents during heavy rains and, therefore, everyone should exercise caution and also try to avoid night travel in hilly areas.

The Chief Minister, in a release earlier in the day, asked people to be very careful, not go into rivers, water bodies and streams to bathe, wash clothes or bathe animals, avoid night travel as much as possible and be ready to strictly follow the warnings given by the Disaster Management Authority.

In view of the bad weather and warning of heavy rains, quarrying and mining activities have been put on hold in Kottayam and Ernakulam districts, officials said.

Monday was declared a holiday for educational institutions in some parts of the State.

The central Meteorological Department had on Sunday predicted heavy rains in Kerala till August 4.