In Palakkad, traffic has been disrupted after soil erosion at Pathamvalavu in Attappady. Fire and rescue service personals have been working to clear the route.

The children who dies in the house collapse

Malappuram: Two children were killed after a house collapsed in the heavy rain in the wee hours on Tuesday at Karipur in Malappuram. The deceased have been identified as 7-month-old Rinzana and 8-year-old Risvana; both were the daughters of Muhammed Kutty of Mundothu Padathu house.

There is heavy downpour still in Malappuram district. The house which collapsed belonged to the grandfather of the children. Local sources said a nearby under construction house collapsed onto victims' residence due to the rain at around 4.30 this morning leading to the tragedy.

The locals rushed to the spot to take them out and brought them to Kozhikode Medical College immediately but their lives couldn’t be saved.

Heavy rainfall is reported across the state. In Palakkad, traffic has been disrupted after soil erosion at Pathamvalavu in Attappady. Fire and rescue service personnel have been working to clear the route.

Kerala is likely to receive heavy rainfall till October 15, predicted India Meteorological Department. An orange alert has been sounded in six districts including Kollam, Pathanamthitta, Alappuzha, Kottayam, Ernakulam and Idukki. IMD has issued a yellow alert in seven districts including Thrissur, Palakkad, Malappuram, Kozhikode, Wayanad, Kannur and Kasaragod on Tuesday.

As the rain is intensifying, the inhabitants in low lying areas, riverbanks, hilly regions vulnerable to landslides should be more cautious to avert rain-related accidents. 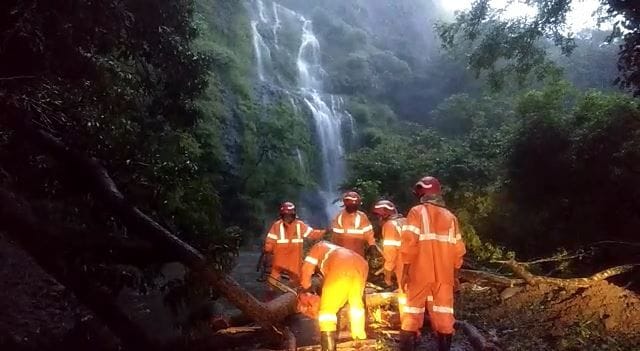 IMD has also predicted strong wind speed reaching 40 to 50 kilometres per hour which is likely to prevail over Kerala, Karnataka, Lakshadweep coasts, the southern part of Bay of Bengal, Kanyakumari and Maldives on Friday. The fishermen are advised not to venture into the sea these days.

Strong wind speed reaching 40 to 50 kilometres per hour are likely to prevail over the southeastern regions of the Bay of Bengal and the Andaman sea, alerted IMD.

Rainfall forecast of IMD for the next four days

Govt application forms to use word 'spouse' instead of 'wife'