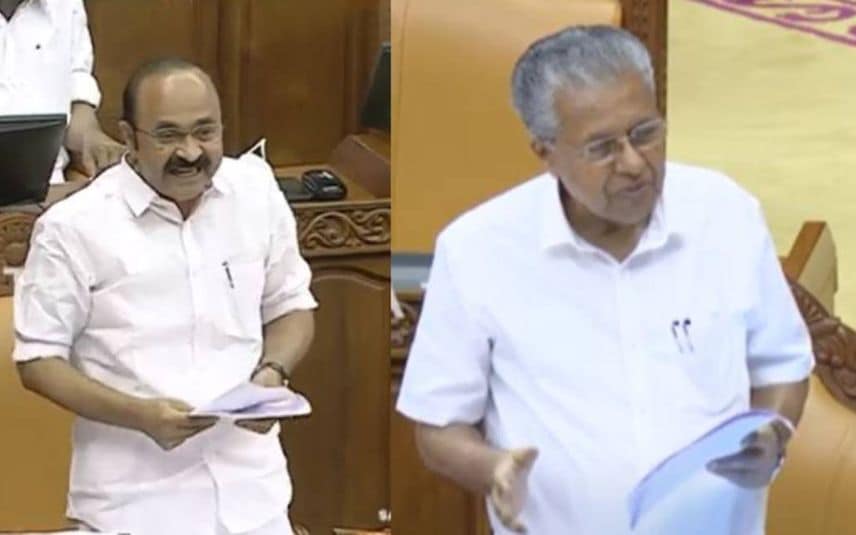 Thiruvananthapuram: The opposition UDF on Tuesday asked Kerala Chief Minister Pinarayi Vijayan why he did not file a defamation suit against gold smuggling case prime accused Swapna Suresh if her recent disclosures about the alleged role of him and his family members was baseless, and urged him to resign from the top office and face probe in the case.

Moving an adjournment motion in the state Assembly over the infamous case, they said CM did not bother to send even a legal notice against the accused whatever startling things she had revealed and claimed that the truth would come out one day anyhow even if "it was covered with a gold vessel".

However, the ruling LDF members raised strong objections against the opposition members levelling charges against CM on the floor of the House, saying the allegations were part of a joint agenda of the Congress and the BJP to destroy the Marxist party and its strong Chief Minister.

Earlier in the day, the Chief Minister agreed to take up the controversial issue for discussion when the UDF moved a notice for adjournment motion over it alleging his government was trying to scuttle the probe.

Amidst the clamour of ruling front members, Congress legislator Shafi Parambil presented the motion saying the opposition has no agenda in the issue and the controversy was not "cooked in their kitchen" and they did not bring it out before the public.

When he mentioned Suresh's statement about the alleged involvement of CM and his family members in the gold smuggling case, state Law Minister P Rajeev raised a point of order and said the charges were part of her statement given by Suresh before the court and it could not be mentioned in the House as per procedures.

However, Shafi Parambil rejected his argument saying that he referred to her revelations before the media about the content of her confession statement and it was not against the rules.

Why the Chief Minister is yet to file a defamation case against the accused if her disclosures were wrong and baseless, he asked.

He also posed a series of questions regarding the intervention of controversial journalist Shaj Kiran in the case, his alleged close contact with senior police officers, the removal of the vigilance director in connection with the case and so on.

"Why has the police registered a case against Swapna Sureh for conspiracy over his statement given before a court under the Section 164 of the Criminal Procedure Code?" he asked and said it might be a first-of-its-kind incident in the country.

Mathew Kuzhalnadan, another Congress MLA, pointed out that Pinarayi Vijayan had said he did not know Suresh when the controversy erupted for the first time two years ago.

"Why did you want to opt for the diplomatic channel to send a parcel to Dubai. Does the state government have no other means to send it?" he asked, referring to the charges of the accused that a package was sent via the UAE Consulate here to Dubai on behalf of CM in 2016 and it was found to contain currency notes.

N Shamsuddin (IUML) read an old Facebook post of the controversial journalist, whom the opposition alleged to have played a mediator in the case to persuade Suresh to withdraw her statement, praising CM to show his closeness to the ruling party and the Chief Minister.

He also urged the Marxist veteran to resign, upholding political ethics, saying that his continuation in the office was against democratic propriety.

However, the ruling benches put up a strong defence for Pinarayi Vijayan saying that the gold smuggling case cropped up again in the state as part of a political conspiracy by the opposition parties.

He charged that the opposition was raising the issue out of their "intolerance" against the LDF's historic victory for the second consecutive time in the recent Assembly polls.

He also satirically said the 'second episode' of the gold smuggling case would also die down soon but nothing would happen to the LDF government or CM.

While A N Shamseer suspected a "Congress-RSS propaganda" behind the allegations and tried to corner the opposition by raising the solar cheating case which had rocked the previous Congress-led UDF government led by Oommen Chandy.

During his speech, Leader of Opposition V D Satheesan attacked the government and asked why the Chief Minister failed to understand the move of his principal secretary M Sivasankar when he moved around with Suresh to many places, including abroad.

Alleging implementing two justices for the same crime, Satheesan claimed when Sivasankar who was reinstated in service was permitted to write a book making revelations about the gold smuggling case, the government filed a case of conspiracy against Suresh for making revelations in her Section 164 statement.

He also sought to know whether the Chief Minister was ready to hand over the smuggling case to CBI as he ordered a CBI investigation on the allegations raised by solar panel case accused Saritha S Nair.

Former minister K T Jaleel (LDF), who also faced charges by Suresh, K B Ganesh Kumar (KC-B), K K Rema (RMP) and so on were also among those who spoke on behalf of the ruling and opposition fronts during the over two-and-half-hour long discussion. PTI

Telecast of assembly sessions only through Sabha TV; should not be used in satirical programmes