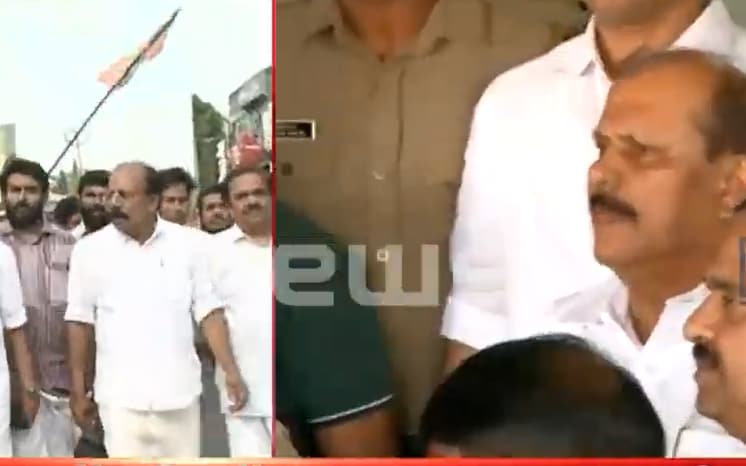 Kochi: Kerala Police has taken Janapaksham leader PC George in custody as the Thiruvananthapuram Judicial First Class Magistrate Court on Wednesday cancelled his bail over the case on hate speech against Muslims.

BJP workers, led by its state president K Surendran and Thrikkakara candidate AN Radhakrishnan have gathered outside the police. Surendran lashed out at police and said the government is treating Hindus and Christians differently for votes.

The Peoples Democratic Party had earlier protested outside the police station demanding the arrest of George.

Earlier today, the Thiruvananthapuram court accepted the arguments of the police that George violated the bail conditions. The court had directed the Fort ACP to arrest George immediately.

The former MLA PC George, who was arrested in relation to his controversial speech at Ananthapuri Hindu Mahasabha ‘Mahasammelan', obtained bail from the magistrate of Vanjiyoor court Asha Koshi on May 1. George was informed that he was granted bail under the conditions of not repeating any similar hate speeches or attempting to influence the witnesses in the case.

He was taken into custody early in the morning on the same day from his residence in Erattupetta in the Kottayam district and taken by road, in his personal vehicle, to the Thiruvananthapuram AR Camp where his arrest was formally recorded for the offence of promoting enmity between different religious groups under section 153A of the IPC.

A day ago, the Kerala High Court had granted him anticipatory bail in the hate speech case registered in Kochi over his speech in Vennala, Kochi. However, it did not affect the case against him in the capital.