DYFI area secretary PK Shefeeq has been suspended from all organisational responsibilities. The district committee took the decision in an emergency meeting. 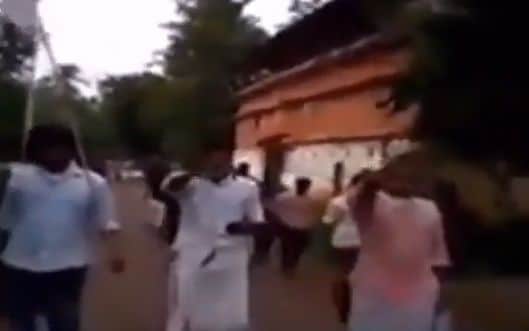 Screen grab of the footage

Malappuram: The Democratic Youth Federation of India (DYFI) has taken action against its leaders who raised hate slogans during a protest in Nilambur. The action was taken by the DYFI district secretariat.

As part of the action, DYFI area secretary PK Shefeeq has been suspended from all organisational responsibilities. The district committee took the decision in an emergency meeting.

Muthedam is an area where a rift has always been prevalent between the Congress and CPM. What started as a WhatsApp argument later turned violent when a CPM worker was injured in a fight.

The slogan was raised in a protest march that happened following the fight. The protesters were seen raising slogans like ‘we didn’t dump the machete that killed Shukur in Arabian sea yet’.

Shefeeq was seen chanting the slogan from the front while others were following his lead. Once this footage went public, Youth Congress and Muslim Youth League demanded the arrest of the protesters.

Following this, the Edakkara police filed a case. Later the DYFI district committee convened an emergency meet and took the action.