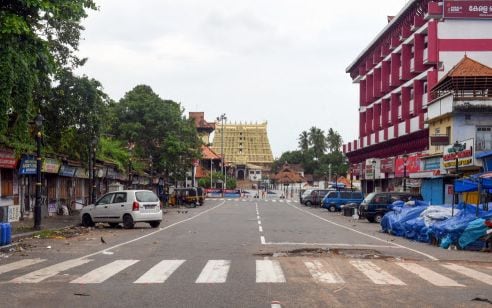 Thiruvananthapuram: The ruling LDF and opposition Congress-led UDF supported hartal in Kerala disrupted daily life in the state due to closure of shops and non-operation of public transportation, but it was generally peaceful, as private means of travel was unaffected, with one solitary incident of violence being reported from Kozhikode district.

In Kozhikode, supporters of the hartal allegedly ransacked the office of Asianet Broadband near Nadakkavu and destroyed equipment after the employees there declined the attackers demand to shut down the establishment in solidarity with the dawn-to-dusk strike in the state in support of the farmers' protests against the Centre's new farming laws.

The Nadakkavu Police Station SHO Santhosh told PTI that a group of hartal supporters manhandled the staff of the Asianet Broadband franchise office after they refused to shut shop.

"We have received a complaint from the franchise alleging verbal abuse and manhandling by a group of people supporting the hartal," the SHO said.

The state president of Indian National Trade Union Congress (INTUC) R Chandrasekharan, while inaugurating a joint meeting of trade unions and farmers here, said the protests against the farm laws would continue till victory is achieved.

He had on Saturday said that the state-wide hartal would be peaceful and there would be no blocking of vehicles or forced shutting down of shops.

While the BJP had termed the hartal as "anti-people", the party's state General Secretary George Kurian on Saturday had said that while the trade unions affiliated to it are not supporting the strike, they would not be openly opposing it.

The protesting farmers have been demanding the repeal of the laws, which they are afraid will do away with the MSP system, leaving them at the mercy of big corporations. PTI