Handwriting on hall ticket not of my daughter; should arrest principal, says Anju's father

Earlier, her father Shaji alleged that his daughter was studious and she committed suicide after being accused of cheating. 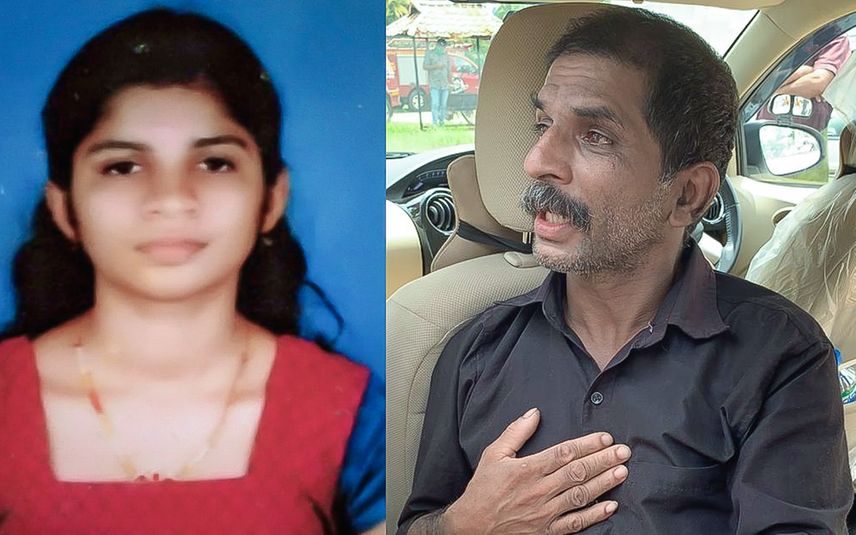 Kottayam: In connection with the death of a college girl in Pala, her father Shaji alleged that her daughter would not cheat in exam and that the principal threatened her. He said in a press meet that she committed suicide due to the mental torture.

"The only demand I have is my daughter should get justice. She would never cheat in exam. We want justice," Shaji said during the press meet.

Kanjirappally Podimattam native Anju went missing after she appeared for an examination and later her body was found in Meenachil river on Monday. Earlier, her father Shaji alleged that his daughter was studious and she committed suicide after being accused of cheating.

The college authorities alleged that the girl had copied portions of text book on the back of her hall ticket and showed it to the media. But Shaji claimed that the handwriting in the hall ticket was different.

"The handwriting on the hall ticket is not of my child. It was written by themselves," he said. The family also demanded that the principal and teacher of Cherppungal BVM College should be arrested. The relatives alleged that the principal threatened Anju and she was caught by mistake. Shaji added that she passed in all other exams with good marks.

Anju, who was a student of a parallel college in Kanjirappally, got her exam centre in Cherppungal BVM College. As she did not reach home after exam, her father called her. But the call was not attended. Then he called her friends and came to know about the incident. Following this, Shaji filed a complaint with Kanjirappally police. The family searched on the premises of the college.

When Shaji's nephew Praveen visited the college on Saturday, the authorities responded in a rude way. On Sunday, Praveen went to the college again and asked to show the CCTV visuals. It was seen in the visuals that the answer sheet was grabbed from the girl by 2 pm and she had to sit idle for 45 minutes in the hall. Later, she left the hall.

There are allegations that even if the girl had cheated in exam, the authorities could have informed the parents or the parallel college. The college informed the matter formally, only after the police inquired them at night.

Principal Fr Joseph Njarakkattil said that though the girl was asked to meet the principal at his office for further actions, she did not obey and left the college. He added that they did not have her phone number or other details as she was the student of another college.

Woman on scooter run over by lorry in Kottayam