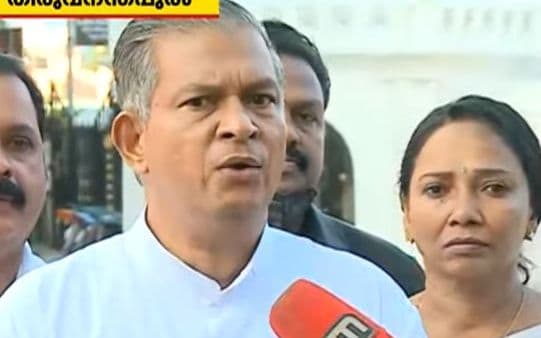 Thiruvananthapuram: Vicar general of Latin Archdiocese Trivandrum, Fr Eugine Pereira, claimed that the Kerala government was not ready to “properly rehabilitate” the members of the coastal community who are affected by the Vizhinjam port project.

"The government, which is not ready to properly rehabilitate us, is now threatening us with police cases. We will not back down. Tomorrow, the government will move the court against us," Pereira told the media today. He was reacting to the police case against protestors, including several priests, in Saturday's violence.

Multiple cases have been registered against at least 15 Latin Catholic priests, including metropolitan Archbishop Thomas J Netto. The police said that the accused have been charged with criminal conspiracy, unlawful assembly and rioting. Sections IPC 143 (Unlawful assembly), 147 (rioting), 120-B (criminal conspiracy) 153 (Wantonly giving provocation with intent to cause riot), 447 (criminal trespass), 353 (Assault or criminal force to deter public servant from discharge of his duty) are slapped against them.

The High Court had on November 22 warned the protesters that stern action would be taken against them if they failed to remove the obstructions.

Pereira said the protesters would file an appeal against the court's order on various matters related to the Vizhinjam protest.

The Latin Catholic church, which has been leading the protests in the coastal village of Vizhinjam for over 100 days, todaurged believersrs to protest against the Left dispensation.

The port, a Kerala government initiative, is currently being developed in a landlord model with a Public Private Partnership component on a design, build, finance, operate and transfer ('DBFOT') basis. The private partner, Adani Vizhinjam Port Private Ltd, commenced construction on December 5, 2015 at a cost of Rs 7,525 crore.

The Vizhinjam International Transhipment Deepwater Multipurpose Seaport authorities had said that 70 per cent of the work had now been completed.