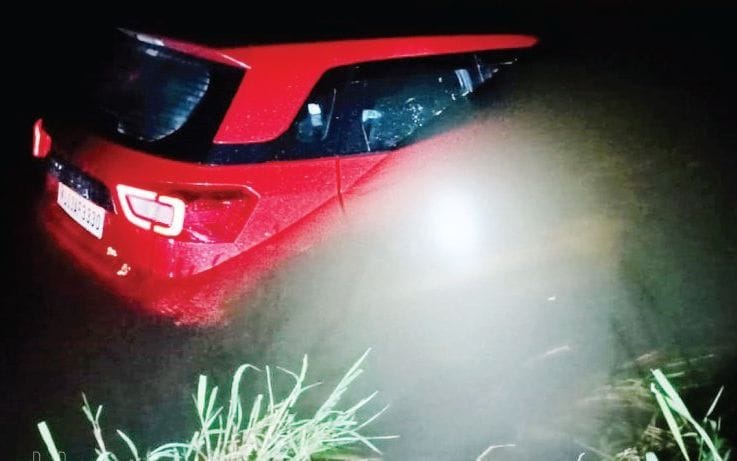 Car that fell into the stream

Kottayam: In a shocking incident, a car fell into a water-logged stream near Nattakom bypass in Thiruvathukkal. Four passengers inside the car, including a three-month-old baby, had a miraculous escape due to timely intervention of the natives.

The incident happened at 10 pm on Thursday. The car was travelling from Ernakulam to Kumbanad in Pathanamthitta. The incident happened as the car was moving through Nattakom Bypass to enter MC road from Thiruvathukkal. There was heavy flooding in many areas surrounding the bypass. The road is also dimly lit during the night. The car went head-first into the water stream upon reaching the jetty near Parechal bridge.

Kumbanad natives Dr Sonia, her mother Shoshamma, relative Aneesh and Sonia’s three-month-old baby were travelling inside the car. The woman in a shop nearby screamed upon seeing the car land in the stream, following which locals rushed to help the passengers. They were rescued and moved to a house nearby. The police said that the driver was using Google Maps for directions while driving.

The locals started the rescue mission and the Kottayam West Police and Fire and Rescue team joined them later.

It may be recalled that a similar accident had happened in May at Kaduthuruthy.