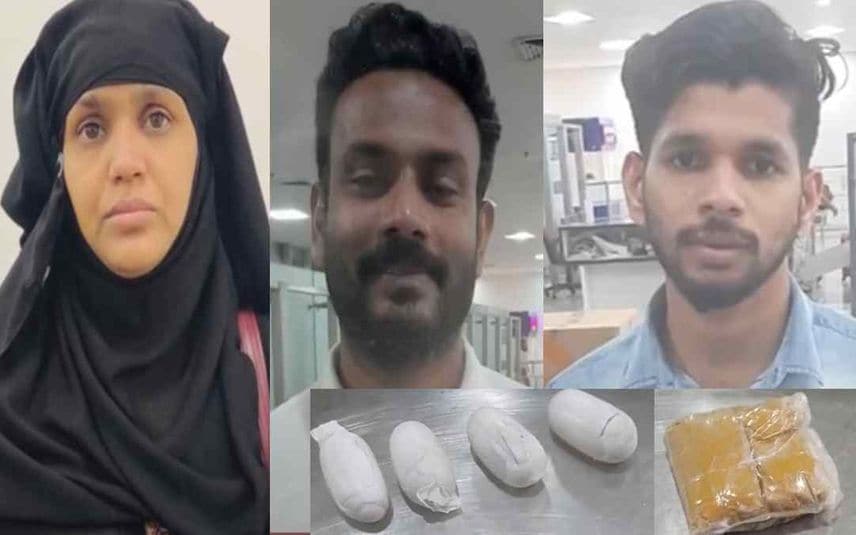 The passengers who were nabbed by the custom officials / Photo: Screengrab of Mathrubhumi News

Malappuram: Customs officials seized 3.06 kg of gold from Karipur international airport on Monday in three separate incidents. Besides, 8 gold biscuits weighing 932 grams were found hidden under the seat of the flight that arrived from Jeddah.

The gold was seized from Malappuram native Jamsheer Edappan and Kozhikode natives Abdul Zamil and Bushra. The three were nabbed at the airport in the night.

Jamsheer who arrived by SpiceJet from Jeddah possessed 1054 grams gold in compound form. The person tried to smuggle it by hiding it inside the body in the form of capsules.

Bushra arrived from Jeddah along with four children. She had 1077 gram of gold in compound form and had kept it in her undergarments. The officials also seized 249 gram of gold ornaments worn by her.

Abdul Zamil, who arrived from Sharjah, possessed 679 grams gold. The person tried to smuggle the gold hiding it inside the body in the form of three capsules.

The estimated value of gold seized is Rs 1.36 crore approximately.