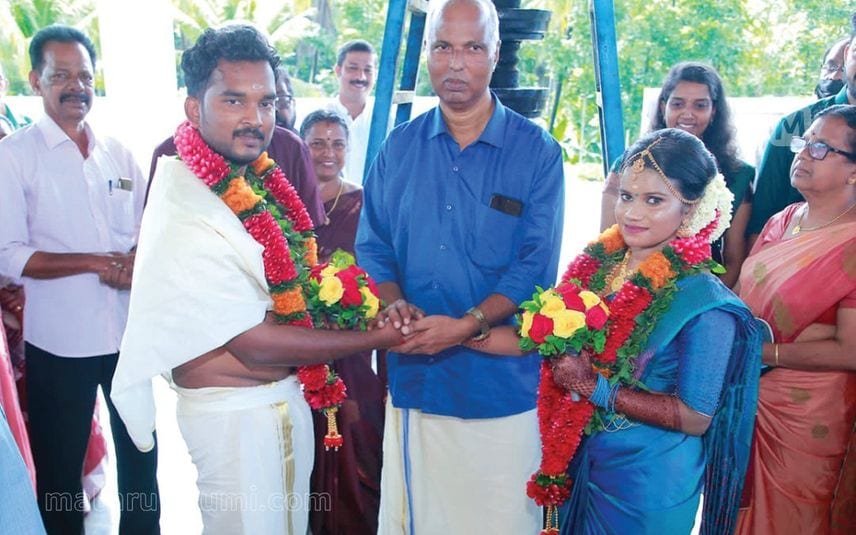 Ollur (Thrissur): Fr. George Kannamplakal adorned the role of a 'father' during the wedding of Haritha and Sivadas at Mandamangalam Mahavishnu temple. He removed his cassock and wore a shirt and dhoti for the girl he looked after, like his daughter.

Haritha was taken to Chenaipara Divyahridayashram when she was two. She joined a convent school in Mala for her primary school studies, where Ambazhakad native Sivadas was also studying.

Haritha and Sivadas rekindled their friendship through an online community formed by alumni. Sivadas is an accountant in UAE, while Haritha is a nurse in Ahmedabad.

The reunion resulted in their marriage as Sivadas’s family came to the ashram to fix the marriage. However, the couple did not meet in person till the day they tied the knot.

The ceremonies in the temple were done by the Father, who is the Divyahridayashram director. Sadya was provided to the ashram inmates, the groom’s family, and the locals. Later, 80 people from the ashram visited the groom’s home for the treat. Haritha will accompany Sivadas to Dubai next month.

It was Mother Teresa who laid the foundation for the Divyahridayashram in 1994.