Rehna Fathima is facing a POCSO investigation for making her minor children paint on her naked body and posting the video of it on social media. 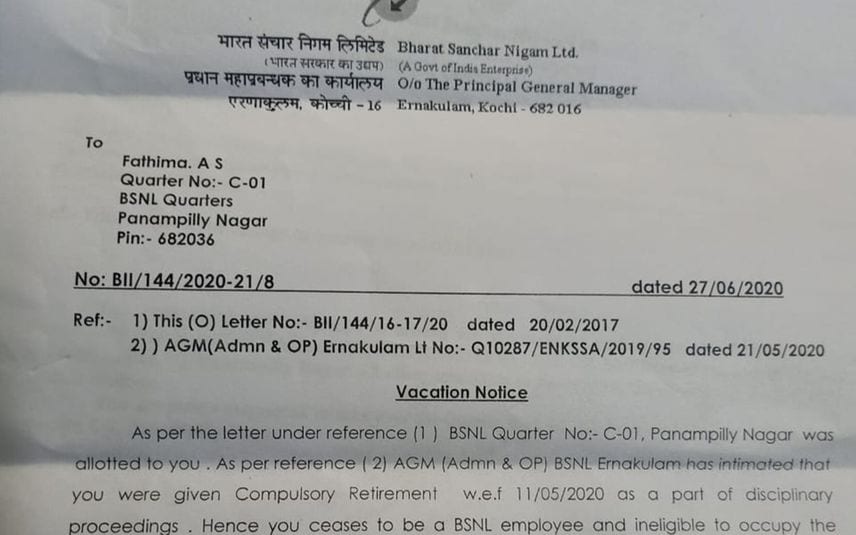 Kochi: The Bharat Sanchar Nigam Limited (BSNL) has directed Rehna Fathima to vacate the quarters in which she had been residing.

Rehna Fathima is facing a POCSO investigation for making her minor children paint on her naked body and posting the video of it on social media. The Thiruvalla police took action on the basis of a complaint filed by OBC Morcha state general secretary Adv A V Arun Prakash and had raided her quarters on June 25.

BSNL said that the raid tarnished the image of the company and asked her to vacate the quarters within 30 days. BSNL also warned of legal action if Rehna failed to comply with the notice.

BSNL had dismissed Rehna from service as part of disciplinary action following her participation in the Sabarimala protest. In this context, Rehna did not have the right to use the quarters, the notice pointed out.

Rehna had uploaded a video of her minor son and daughter painting on her naked body titled 'Body and Politics' on YouTube and Facebook. Police registered non-bailable offences as per IT Act and Juvenile Justice Act and POCSO Act.

During the raid, the police seized paint, brushes, colours and a laptop from Rehna’s house.

It must be remembered that BSNL had suspended Rehna Fathima for 18 months in connection with the Sabarimala women entry protest. Later, she was dismissed from service stating that her actions adversely affected the company’s dignity and revenue.

BSNL to launch 4G in four districts of Kerala

Heavy rain till June 9 in Kerala