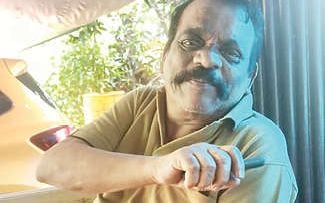 Ponnani: Palliyalil Soman, a native of Udikikkara near Ponnani in Malappuram district, still remembers a chapter of his life that happened 50 years ago.

Soman was then 25 and an active Congress worker. He was allocated Rs 3000 by the Scheduled Caste Development Department (SCDD) and with that he started a hotel in Amshakkacheri region of Ponnani, which apparently was the ‘first scheduled caste hotel in India’.

It was a traditional hotel constructed with coconut stock. Though it was named as Harijan Hotel, it became popular in the name Hotel Priyadarshini.

In 1971-72 period, it fed hundreds including commoners, labourers and students, said Soman. He detailed how the venture operated.

“The hotel had food items including tea, fries, meals, meat, tapioca and fish like sardine. People were able to get a full tummy with minimum price at a time when poverty was a companion for many. It indeed was a relief for many,” he said.

According to Soman, news reels of the hotel’s inaugural function were exhibited during film shows in the nearby theatres. “Former president VV Giri and PM Indira Gandhi had written letters extending wishes,” he added.

As per the SCDD policy, the repayment of the allocated money had to be repaid within 10 years and for the first three years, they were given relaxation.

Meanwhile, Soman got a job in police service in 1973 and he handed over the operations to his friend. Months passed and operations went haphazard. In 1975, the hotel was shut down and SCDD issued confiscation notice due to default of payment.

However, the confiscation procedures were revoked on the intervention of then Gujarat Governor KK Vishwanathan. Rs 30 was deducted monthly from Soman’s salary and the arrears were cleared.

Soman retired as head constable and is presently in his retirement life. He is 76 now.