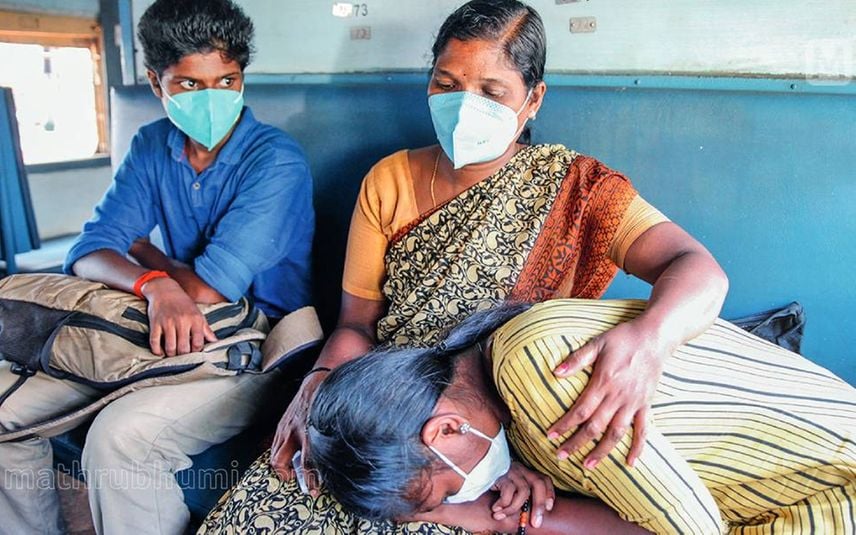 Manju and family in train I Photo: Mathrubhumi

Kollam: A family consisting of a mother and two children were forced to spend their time in train due to nuisance created by anti-social elements in their life. Manju and her two children, who live in a Tsunami flat in Iruvipuram, are constantly facing the threat of anti-socials who disrupts their day-to-day life in all ways. To avoid their threats, the family had to resort to the safety of the train compartment on Monday.

Manju was brought up in an orphanage. Later, the family was given Tsunami flat with the help of government. She worked as a housekeeper and it was the only source of income for the family. However, with the constant threat of anti-socials looming large, she was forced to live a life out of fear.

The incidents started after a video insulting her daughter was shared online. When questioned, she started to receive threats and one miscreant intruded into her house. The police arrested the culprit and after serving some time, he was released on bail. On Sunday, few people forcefully knocked on the door of the house and scared the family. Even though the police came to their aid after she contacted the control room, the threats and harassment continue.

Manju didn’t have the courage to go home on Monday. The family spent time in the park during the day and boarded the night train and went to Ernakulam. They returned to Kollam by another train the next morning.

“The train ticket was taken with the money set aside to buy gas. Since the covid pandemic, I can't go for housework. Adv. M.Mohammed Humayun took up our case free and it was the only reason why we could actually manage the case. I returned home on Tuesday. But at night someone disconnected the power supply. I do not know what to do with my kids. Their father has abandoned us, ”said Manju.

"My daughter managed good marks in Plus 2 and she is a softball player. But she is mentally distressed because of these problems,” 'Manju added. Her son, who is studying in 10th class, was unable to pursue his studies due to lack of a smartphone.