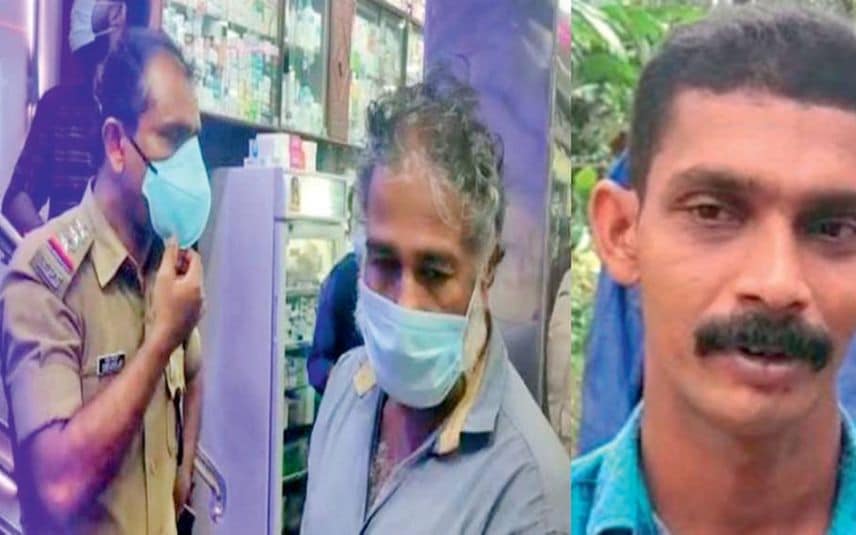 Anchal (Kollam): The real culprit in a medical store robbery case has been arrested by police after 6 years. With this, the torture of an innocent man by police alleging crime has come to light.

The robbery took place in 2014. Anchal native Ratheesh (35) was then arrested by police. He had to spend 45 days in police custody and also in jail tolerating the torture.

However, last week police arrested Thiruvananthapuram Karakkode native Dasan from Tirur for a robbery. When his fingerprint was examined, it matched the one found in the crime scene in Anchal medical store robbery of 2014. Anchal police then arrived in Tirur and took him under custody. In further interrogation, Dasan admitted to the robbery.

Police on Sunday, took Dasan to the crime scene for evidence collection.

It was on September 21, 2014 the robbery took place at the Sabari medical store in Anchal. Ratheesh, an autorickshaw driver, was then arrested by police after few months of the robbery.

“I was brutally beaten up while in custody. They even applied chilli paste on my body,” Ratheesh remembers the horrifying past.

He spent 45 days in jail. Later the family approached court. Police failed to find evidence even with polygraph test and later he was released. However, he lost the RC Book of the auto and money to police.

The family is still bearing the brunt of the humility occurred. His autorickshaw has corroded being locked up at home.

The real culprit has been arrested while the hearing of the Ratheesh’s complaint against Anchal police to the Police Complaint Authority is slated to be held on December 29.