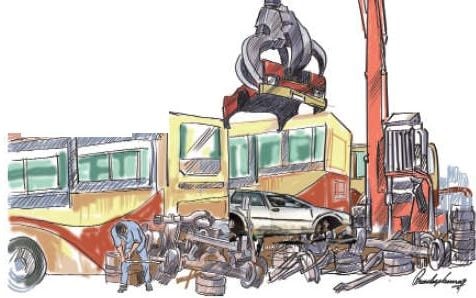 Thiruvananthapuram: KSRTC has been preparing to venture into vehicle scrapping to improve non-ticket revenue. A high-level meeting convened under the presence of chief secretary VP Joy has directed KSRTC to submit a report on this. The apparent plan of KSRTC is to utilize the opportunity over union government’s scrappage policy.

The union government has directed to scrap commercial vehicles (15 years old) from 2023 and private vehicles (20 years old) from June 2024, if they fail to pass the computerised fitness test. On the other hand, it is estimated that the state has around 35 lakh vehicles that are 20 years old. A large number of vehicles under this category are probable to fail in the fitness test and they have to scrapped.

KSRTC eyes this as an opportunity while vehicle owners expect they will get scrapping done at cheaper rates than private players. A certain percentage of profit can be fetched from scrapping the vehicle.

KSRTC has 172.86 hectares of land under it. Even one by fourth of it is required for this. Many regions remain unused. So finding space for construction of scrapping centres will not be difficult. Each centre will require 2 acre plot.

All govt vehicles older than 15 yrs to be scrapped, deregistered: Road transport ministry