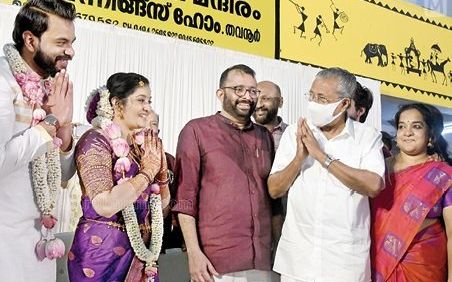 CM Pinarayi Vijayan greeting the couple during the wedding function

Thavanoor: An old age home operated under Department of Social Justice here in Malappuram witnessed the wedding of Niranjana, daughter of former Speaker of Kerala Legislative Assembly P Sreeramakrishnan and his wife Divya.

It was Niranjana’s decision to hold the wedding there. Sreeramakrishnan and family often pay visits to the old age home. They spend special days like Onam and other celebrations with the inmates and have grown very close with them over the years.

Interestingly, Sreeramakrishnan donated jewellery worth six sovereigns to the anti-dowry collective during the function.

Meanwhile, the wedding function was attended by veteran politicians and illuminaries including chief minister of the state. It was Governor Arif Mohammad Khan who handed over the wedding garland to the couple.

As part of the wedding, the inmates were distributed with new attires.

Niranjana has been married off to Sangeeth, son of Sivakumar and Chithralekha, and he hails from Thiruvananthapuram.