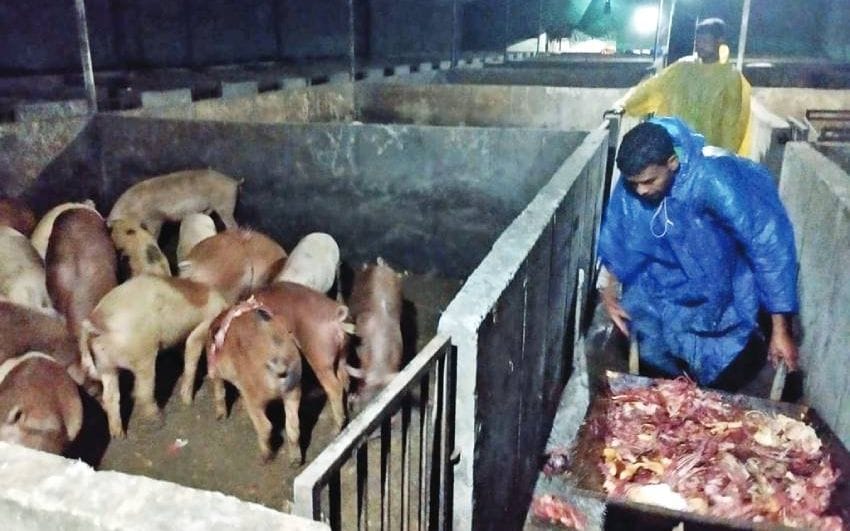 Mananthavady: "I have been interacting with these pigs for over 8 months. Rather than a livelihood, I find happiness in rearing these animals. I can understand their language. Why do they kill these animals which are frolicking here?," asked Makka with tears. This migrant worker is one among the two West Bengal natives who work as caretakers of the pigs on the farm. He was shocked when he was informed that all pigs in the farm will be culled as per government order in the wake of African Swine fever virus outbreak.

When he came to know about this, he spent more time with the pigs on Sunday. His co-worker Durga also expressed grief over the pigs.

Makka and Durga, who are friends, reached Kerala in search of a job. Both were happy after getting a job at the pig farm in Kollangode. The two migrant workers and their families have been living in a shed close to the farm.

"Many of the culled pigs were pregnant. Though we requested the farm owner to spare the pregnant pigs, no action was taken to save them. The pigs were having a peaceful life as nobody visited the farm. We never killed any pig and have only looked after it. Even those who arrive for purchasing the pigs were not allowed inside the farm. Then how did they contract the disease?" Durga turned emotional.

People who witnessed the emotional moment of Makka and Durga also broke into tears.

"We don't know whether we would get any job anywhere. Maybe we will be forced to choose different paths in life. How could we look after our family without a job? We faced the crisis while leading a happy life. We pray no creature would face a similar situation," Makka and Durga added.