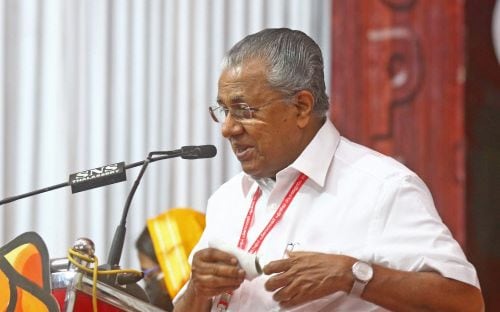 Kochi: Attacking Rahul Gandhi's Jaipur speech calling for establishing a "rule of Hindus" in India after ousting "Hindutva" government, Kerala Chief Minister and senior CPM leader Pinarayi Vijayan on Tuesday alleged that the Congress leader was putting forward an idea of a "soft Hindutva" alternative against the BJP at the Centre and it will further weaken the Congress.

Stating that the Congress could not provide a credible alternative against the BJP at the Centre, Vijayan also said it is now clear that a secular alternative of the regional parties will emerge at the national level and the Left could provide a direction to it.

He said the upcoming Party Congress of the CPM will deliberate the issue.

Referring to Rahul Gandhi's speech at the recent Congress rally in Jaipur, the Kerala Chief Minister said the Congress leader's endorsement of politics based on religion was undermining secularism and that the only way to fight the BJP's "communal politics" was to form an alliance of regional parties in which the Left has a key role.

"Rahul Gandhi's statement is part of the soft Hindutva stand adopted by the Congress party long ago. He has only re-emphasised that policy in Jaipur," Vijayan said, inaugurating the CPM Ernakulam district conference here.

Addressing the rally against inflation in Jaipur on Sunday, Rahul Gandhi had said India is a country of Hindus and not Hindutvadis who want to be in power at any cost.

"I am Hindu and not Hindutvadi," he had said, adding that the Hindutvadis have to be "ousted" once again and the "rule of Hindus" have to be brought in the country.

Lashing out at Gandhi, Vijayan today said because of this kind of "soft Hindutva" policy of the Congress party, many of its leaders have now become the leaders of the BJP.

Claiming that there are no differences in the economic policy of the Congress and the BJP, the Communist leader said the regional parties with secular outlook are very strong in many states and the Left should work to rally them against the BJP government at the Centre.

"Obviously, a secular alternative will emerge at the national level," Vijayan said.

Speaking about the political situation in Kerala, the Chief Minister alleged that the BJP and the Congress-led UDF were trying to put hurdles in the path of the functioning of the Left government, which was re-elected to power in April this year.

He accused the UDF and the BJP of trying for a communal polarisation in the state and said the social media platform was being misused for that purpose.

Vijayan also attacked the Indian Union Muslim League (IUML), alleging that the key UDF partner was forging alliance with outfits like Jamaat-e-Islami to target his government.

Referring to the recent IUML rally held in Kozhikode against the state government's Waqf Board policy, the Chief Minister said the slogans raised in the rally were an indication that the the Congress ally was influenced by the ideologies of radical religious outfits. (PTI)