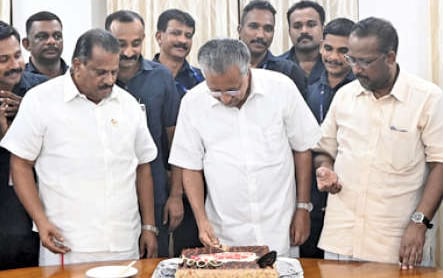 Kochi: Chief Minister Pinarayi Vijayan, who has no habit of celebrating birthdays, was busy with Thrikkakara by-election campaign on his 77th birthday on Tuesday. When he arrived at the guest house in the morning, LDF convener EP Jayarajan had already arranged a birthday cake secretly.

Only CPM district secretary CN Mohanan and security officials were there besides EP Jayarajan. CM cut the cake and shared it among them.

Later, CM attended a public gathering near St Mathews school in Vennala. After his address, the organisers of the convention announced that it was the birthday of the CM. Following this, a 7th standard student KS Anamika reached the dais and handed over a flower to the CM. CM received the flower with affection and left the venue.