Elephant stabs mahout to death during temple festival in Thrissur

The elephant also destroyed plantain and coconut farming on a private land nearby. 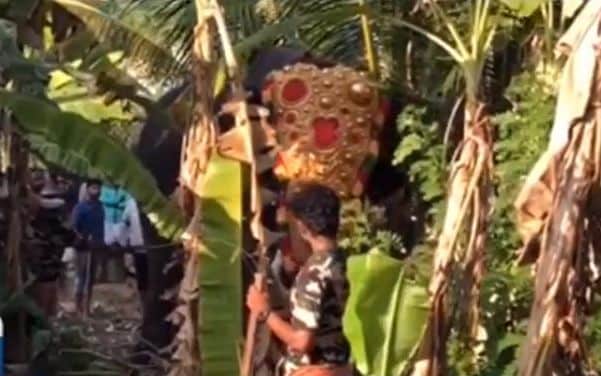 Screengrab of the mahout that ran amok in Thrissur

Thrissur: An elephant ran amok and stabbed its mahout to death during a temple festival at Karalam in Thrissur on Tuesday.

The deceased was identified as Nandan (42), a resident of Sreekrishnapuram in Palakkad district. The elephant also destroyed plantain and coconut farming on a private land near the temple.

The elephant named ‘Guruvayur Sree Krishanan’ ran amok while being taken to the temple for the festival. Nandan was stabbed while trying to bring the elephant under control.

The mahout sustained severe injuries and was rushed to the Irinjalakuda co-operative hospital. However, his life could not be saved.

The elephant, owned by the Guruvayur Devaswom, was later brought under control by the elephant squad using ropes.