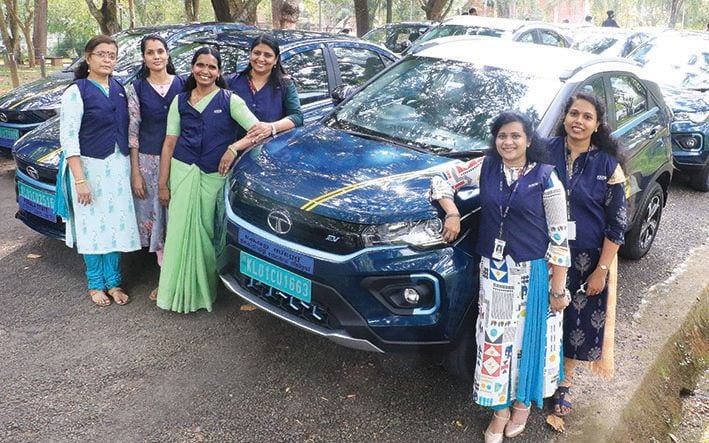 Women officers of KSEB with the e-Vahans purchased by KSEB for its 65th-anniversary celebration | Photo: Mathrubhumi

Thiruvananthapuram: Eight women officers of Vydyuthi Bhavanam in Pattom will drive eight cars among the 65 new electric cars purchased by KSEB for its 65th foundation day celebration on Monday. Engineers and finance officers of Kerala State Electricity Board will turn drivers of e-cars as they ride the new vehicles through eight routes in the city. They will be known as ‘Earth drive women riders’.

All eight drove perfectly during the test drive. Women drivers were made part of the program for the campaign of electric cars and for women empowerment. The event neatly overlaps with Women’s day that falls on March 8. They will ride the cars through eight routes from Kanakakkunnu and will make stops at SAP camp, collectorate, Technopark, engineering colleges, Vikas Bhavan and Public Office for campaigning. One route also includes Kovalam. The journey will end at Vydyuthi Bhavanam in Pattom.

The board purchased five Tata Nexons and 60 Tigors for this purpose. All cars are in the same blue colour and have ‘KSEB Keralathinte Oorjam’ written on both sides of the car. The toll-free number 1912 is also written on the car. The vehicles will be flagged off by Ministers K Krishnankutty and Antony Raju after 11 am on Monday.