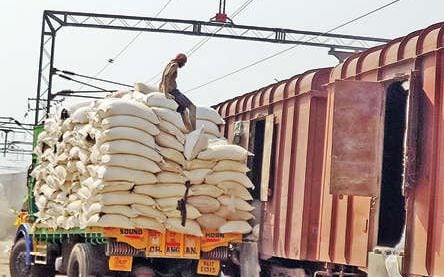 Chalakudy: Upon the arrival of a goods train at the Chalakudy railway station, people are forced to step away from its vicinity or they would be covered in dust. Almost ten goods trains carrying bran arrive at the station every month. There may be as many as 42 wagons in one train.

The railway station will be covered with dust particles when sacks are unloaded. During the time of unloading, people cannot stay on the platforms. The dust is so insufferable that it even reaches the office room and ticket counter next to the first platform.

It is not a usual practice to stop goods trains and unload goods so close to platforms with passengers. During the peak of the summer season, the dust problem becomes more intense.

The seats and footpaths will also be covered with dust. It has been years since this dust problem started. The bran after extraction of oil is brought from the rice mills in other states. They arrive in powdered form. This is being brought to be taken to cattle feed factories in the Irinjalakuda zone. Passenger’s association has submitted petitions to the concerned officials several times urging them to take necessary measures. However, there has been no action from their part.

Railways liable to compensate for late arrival of trains unless proved delay beyond control: SC