The lorry was coming from Wayanad and when it reached 200 meters near Kodancherry town, the driver noticed that the hay was on fire. 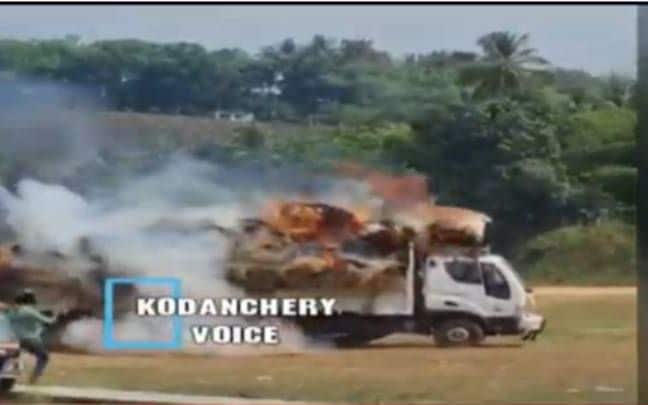 Kozhikode: Bundles of hay loaded in a lorry caught fire on Sunday afternoon in Kodancherry. As soon as the driver noticed the fire, he took the lorry to the next ground and started driving it in circles. With this, the hay bundles fell down and a major accident was averted. Locals and firefighters put out the blaze preventing a major accident.

The lorry was coming from Wayanad and when it reached Kodancherry town, the driver noticed fire on the hay. The panicked driver abandoned the vehicle in Kodancherry town and ran away.

Shaji, a local, took control of the vehicle and drove it to St. Joseph's Higher Secondary School ground. As the lorry was taking rounds, all the bundles of hay fell on the ground. The locals separated the bundles which did not catch fire. The fire force came from Mukkam and brought the situation under control.

The bundles would have caught fire due to a probable short circuit from the overhead cables. There have been similar incidents before.