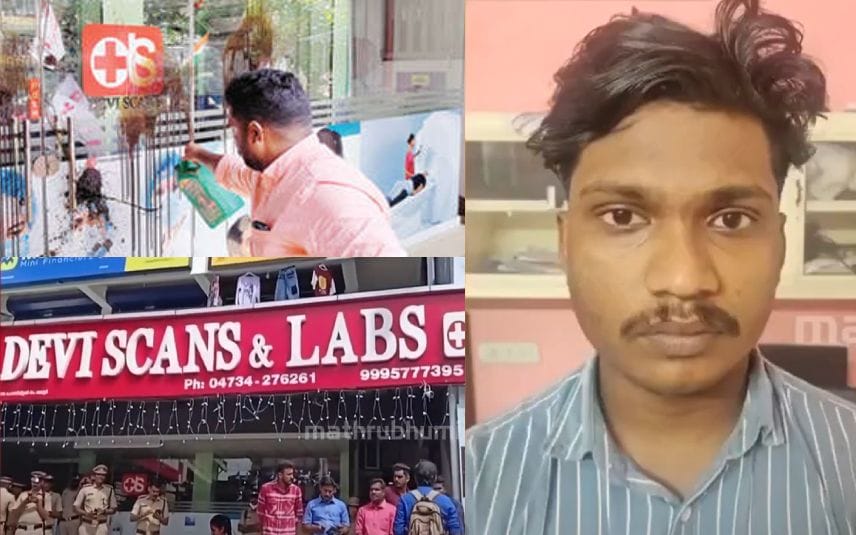 Pathanamthitta: The police probing the case related to the capturing of dressing room visuals at a lab here will seek the custody of the accused Amjith from the court. Police doubt whether the accused captured the visuals of many women who visited the lab and shared it with somebody else. Observing this, the probe team is mulling forensic examination of the phone.

The accused who is a native of Kollam’s Kadakkal was arrested over the woman's complaint.

"She found the mobile phone hidden in the dressing room. She deleted the video and complained to the police. We took him into custody and interrogated him following which he confessed to the crime," said a police official.

The woman reached the centre for a scan of her leg. For that, she needed to change her clothes. She entered the room and found the mobile phone stacked among clothes and it was recording pictures of her.

Devi Scans & Labs of Adoor here is in the middle of protests after police arrested the radiographer for allegedly capturing the video of a woman inside the dressing room. Though state health minister Veena George ordered a high-level probe into the incident, major political parties and youth organizations in the region staged an agitation in front of the scanning centre to mark their protest. Political outfits including Youth Congress, DYFI and BJP protested against the centre.

DYFI members poured black oil on the glass and walls of the centre. They also threw away items stored on the top floor. Congress workers locked up the main door and destroyed decorative lights at the centre. Police rushed to the spot for bringing the situation under control. BJP expressed concerns over the filming girl inside the dressing room at the centre.

According to locals, the health department has already received many complaints about the centre that was inaugurated just two months ago. There is a tie-up between the lab and doctors in the nearby hospitals, they alleged. Even the patients approaching General Hospital are sent to scanning in Devi Scans and if the report of some other scanning centre is submitted, the doctors turn very hostile, they said.

Kerala falls behind in railway report card for past 8 years