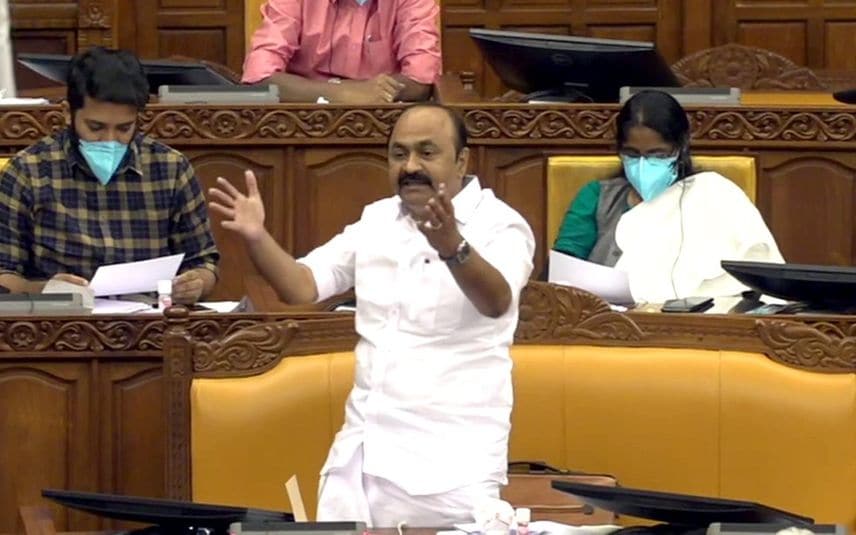 Thiruvananthapuram: Do not turn the Kerala Legislative Assembly into a 'Kaurava Sabha' where women are abused, the Congress-led UDF opposition said in the House on Monday and sought that the controversial remarks by CPI(M) legislator M M Mani against a woman MLA be withdrawn from the records.

Leader of Opposition (LoP) in the state assembly V D Satheesan said that they had initially asked Mani to withdraw his remarks and then they had requested Chief Minister Pinarayi Vijayan to direct the CPI(M) MLA to take back what he had said against RMP legislator K K Rema.

However, neither of them were ready to do the same and this gives rise to two important questions -- can the assembly come to a conclusion that widowhood is a woman's fate and secondly, is the House a 'Kaurava sabha' where women can be insulted and abused, he said.

Satheesan said that a progressive state like Kerala cannot come to a conclusion that widowhood is women's fate.

He said such a conclusion is the basis of 'sati' and it is unbecoming for a state like Kerala to come to such conclusions.

Secondly, the Assembly is not a 'Kaurava sabha' where 'Duryodhanas' and 'Dushasanas' abused women.

"This is a Niyamasabha (legislative assembly). Do not allow this to be turned into a 'Kaurava sabha'. We urge the Chair to remove the remarks of the CPI(M) MLA (Mani) from the House records," the LoP said.

Deputy Speaker Chittayam Gopakumar said it would be examined.

The controversial "that was her fate" remark by Mani against Rema had rocked the Kerala Assembly last week with the House proceedings being called off for the day on July 15 due to heated protests staged by opposition UDF members.

A day before that, Mani, while participating in the House discussions on fund requests by the police, alluding to Rema had said a "mahati" (great person), who spoke against Chief Minister Pinarayi Vijayan and the LDF, became a widow and that was her fate.

"We (Left front) are not responsible for that," he had said.

That day too the opposition had protested against the remarks and had demanded that he apologise to Rema and withdraw his remarks.

Rema's husband, T P Chandrasekharan -- a CPI(M) rebel -- was hacked to death in May 2012 after he floated a parallel Left outfit called the Revolutionary Marxist Party (RMP) in his home turf Onchiayam in north Kerala.