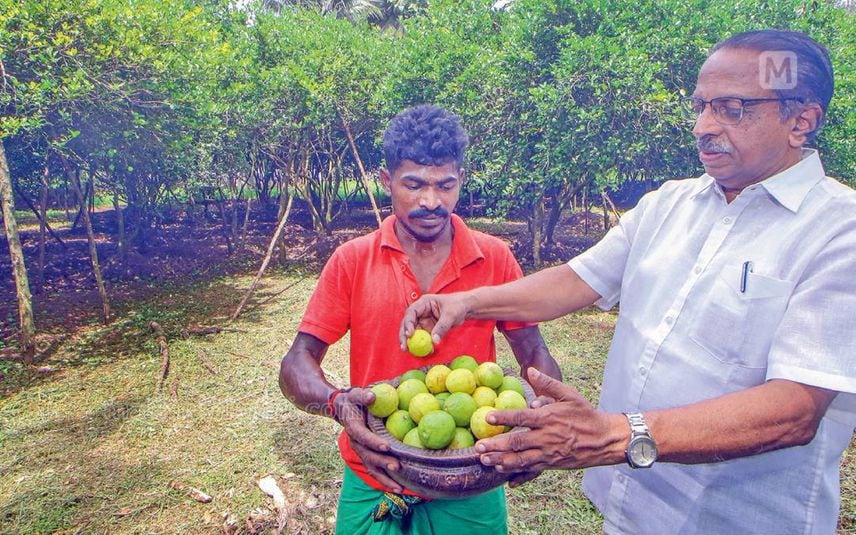 Dr George Varghese with the lemons from his farm | Photo: Mathrubhumi

Kollam: When Dr George Varghese planted lemon samplings across 70 cents of land near Ashtamudi lake about 10 years ago, he faced an array of questions. Most people questioned whether lemon trees would grow near a lake. Now, a beautiful lemon garden with almost 150 trees in full bloom has been attracting everyone to this land.

This doctor has been generating an average income of Rs 1.5 lakh annually by selling lemons from this farm.

The 70 cents of land on the side of a four-acre plot near Perinad Railway station is situated close to 110 kV electric lines. So, tall trees cannot be planted on this plot. That is how lemon trees came to the scene.

Murukan, who brings lemons and other medicinal plants from Thenkasi, put forth the idea of planting lemon trees on this land. He brought the saplings himself and planted them as well. Murukan and his father Ponnuswamy look after the trees. The trees started blooming by the fourth year. The season of lemon blooming is from April to August.

‘Thani Nadan’, an agency selling organic products has approached the doctor for lemons grown in his garden. Dr George Varghese says that lemon cultivation is much more profitable than coconut cultivation. He says that lemon trees will grow on any type of soil, given that they receive enough sunlight and have moisture content in the soil. His wife, Idukki native Annamma George and son Dr Varghese K George are also very interested in farming.

No respite for farmers: Kerala govt yet to release funds to Debt Relief Commission

Abundant ‘Moottil pazham’, a feast for eyes in Abraham’s farm