Damage of vaccine vials in Kozhikode: All vaccination centres told to be vigilant 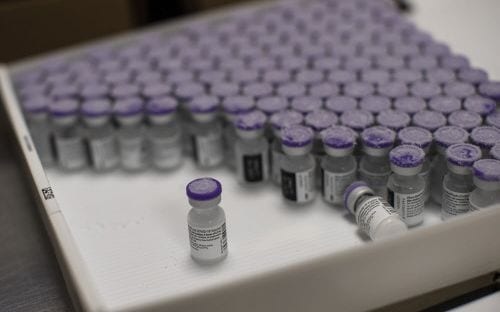 Kozhikode: The investigation report in connection with the damage of vaccine vials in Kozhikode was handed over to the director of the state health department here the other day. 800 doses of Covishield vaccine was frozen due to improper preservation at Cheruppa Hospital in Kozhikode. The report after the probe by RCG officer Dr Mohandas concluded that the damage occurred due to human error from the nurse who had wrongly kept the vaccine for preservation.

Cheruppa hospital is the health unit of Kozhikode Medical College Hospital. The health officials said that the vaccine arrived on Monday evening after the public health nurse on duty left. Another nurse, on request over the phone, kept the vaccines in a deep freezer where the temperature is between -15 and -25 degrees celsius. It was supposed to be kept in a refrigerator where the temperature is between 2 degrees and 8 degrees celsius. The officials noticed the next day that the jabs had become solid and damaged while carrying it to Peruvayal, Mavoor and Perumanna panchayats.

V Jayashree, DMO of Kozhikode, told mathrubhumi.com that the report was handed over to the director on Thursday and immediate action will be initiated against the concerned staff as soon as directions are received. She also added that the unfortunate incident was due to human negligence and was not intentional. Proper directions have been given to all vaccination centres in Kozhikode to be vigilant to avoid any such incidents.

The incident occurred amidst the state facing a severe shortage of vaccines and will remain as a black mark on the claim of ‘zero wastage of vaccines’ record of the state.

Restrictions to be imposed on infertility clinics in Kerala, violators to face 10 years imprisonment