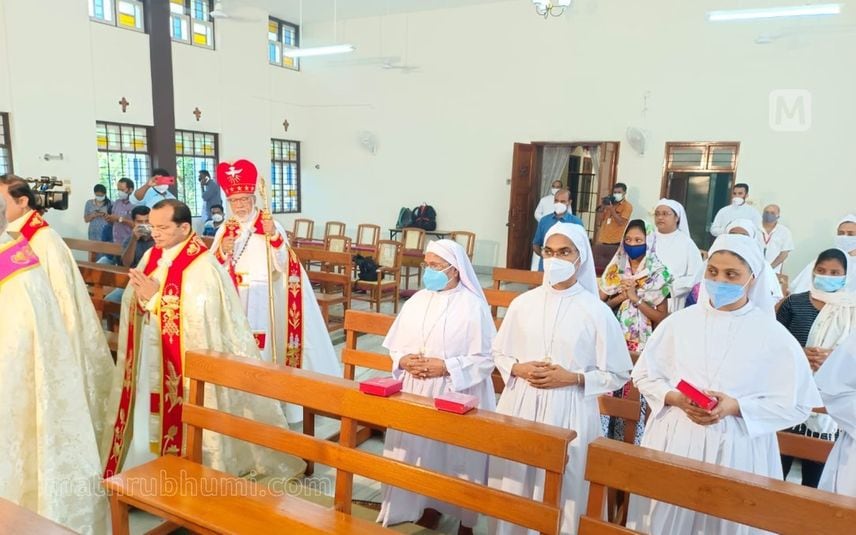 Kochi: Discontent is brewing among a significant section of priests, nuns and laity of the Ernakulam-Angamaly archdiocese of the Syro-Malabar Catholic Church over its synodal decision to "impose" uniformity in celebrating the Holy Mass in churches under its control.

The Church's controversial decisions also included the "removal" of Mar Antony Kariyil as Metropolitan Vicar of the Ernakulam-Angamaly archdiocese and alleged irregularities in the sale of the lands owned by the archdiocese.

Fr Kuriakose Mundadan, secretary, presbyteral council, Ernakulam-Angamaly archdiocese, said the 'Viswasa Samrakshana Maha Sangamam' organised here on Sunday was a "huge success" and the resolutions adopted in the conclave would be sent to the Vatican.

Syro-Malabar Catholic Church is one of the 22 Eastern Oriental Churches in full communion with the Pope.

Fr Mundadan claimed that around 60,000 protestors had gathered at Kaloor on Sunday.

He said the priests, nuns and faithful in the archdiocese had been protesting since the Synod of Bishops of the Syro-Malabar Church decided to "impose" a uniform mode of celebrating the Holy Mass in churches.

"They (Synod) are asking us to end the way we celebrate the Holy Mass--that is, celebrating the Holy Mass facing the people. We have been following this practice for the last 60 years. Now, they are imposing us on a 50:50 formula where the priest faces the faithful in the first half and then the altar in the second. We are not satisfied with this decision. We will continue to celebrate the Holy Mass facing the people because it was part of the Second Vatican Council," Mundadan told PTI.

He alleged that the Synod took the decision for uniformity in celebrating the Holy Mass by sacrificing unity in the Church. "The Synod was hijacked by a lobby and they ignored the voice of the people," the priest charged.

Stunned by the massive show of strength by the protesters in Kochi on Sunday, a source in the Syro-Malabar Church said the laity who participated in the conclave were "misled by a section of priests" opposing the Cardinal and the decisions approved by the Vatican.

The source alleged that they came out on the street as the Vatican started taking action against those who perpetuated indiscipline in the Church.

The source said their immediate provocation is the circumstances that led to the resignation of 72-year old Archbishop Antony Kariyil, who according to him, is the "core" of the actions of the protesting priests.

Asked what is the way out for ending the crisis, the source said "we will buy time" as they (protesters) are an organised forced now. All the decisions should come from the top (Vatican), he said.

It was on July 30, the Church issued a communication informing that Archbishop Andrews Thazhath was appointed as apostolic administrator of Ernakulam-Angamaly archdiocese of the Syro-Malabar Catholic Church.

The Church had said the administrator was appointed after Pope Francis accepted the resignation of Metropolitan vicar Archbishop Mar Antony Kariyil.

It said Archbishop Thazhath will function as the administrator while continuing his duties as the Archbishop Metropolitan of the Thrissur archdiocese and Cardinal George Alanchery, who is the head of the Syro-Malabar church, will continue as the Metropolitan Archbishop of Ernakulam-Angamaly archdiocese.

Vatican emissary, Archbishop Leopoldo Girelli, the Apostolic Nuncio, had visited the Ernakulam-Angamaly archdiocese and held discussions with Archbishop Kariyil before receiving his resignation.

Nuncio had on July 19 issued a letter demanding the resignation of Kariyil.

The protesting priests had alleged that the Vatican emissary's move came after the Ernakulam-Angamaly archdiocese refused to comply with the decision by the Synod of bishops of the Syro-Malabar Catholic Church in August last year to follow a uniform way of celebrating the Mass.

Kariyil was appointed Metropolitan Vicar of the Ernakulam-Angamaly archdiocese in August 2019 following a revolt by the section of priests against its head, Cardinal George Alencherry.

Till then, Cardinal Alencherry, who is also the major archbishop of the Ernakulam-Angamaly archdiocese, had enjoyed full power in the face of its administration, finance and pastoral ministry.

The protesting priests also alleged that there were irregularities in the land deals done in the archdiocese since 2017.

The Vatican should provide compensation to those who suffered due to such "dubious" deals, the priests said.

Many Bishops, priests, religious and laity of the Syro-Malabar Church are present all over the world and share the missionary and pastoral life of the sister churches.

New Bishops for Thalassery and Palakkad