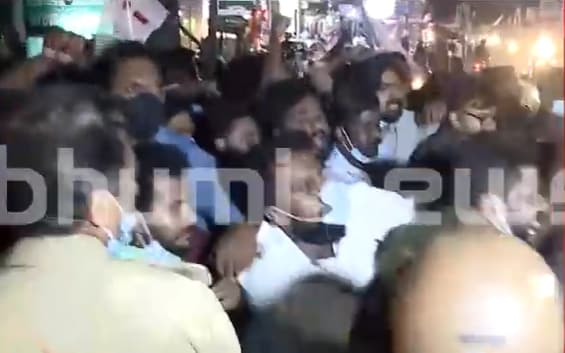 Idukki: Several clashes broke out between SFI, DYFI and Youth Congress workers across the state following the murder of the SFI leader Dheeraj Rajendran in government engineering college at Painavu here on Monday.

A Congress convention chaired by K Sudharakan in Malappuram was disrupted as DYFI members protested outside the venue. Several key party members were present during the meeting. Meantime, unknown assailants attacked a Congress office in Perambra in Kozhikode and caused damages to the building.

In another incident, a flag pole of KSU was destroyed in Pathanamthitta while SFI was observing a protest march in Musaliyar College. Following this, a face-off between police and students caused a brief tension in the area.

Dheeraj Raveendran, an SFI member and student of Engineering College in Painavu succumbed to the injuries during an alleged clash with Youth Congress and KSU members. The quarrel related to the elections to the college union led to the clash, it is learnt.

Police have nabbed Youth Congress Mandalam Committee president Nikhil Paily, the main suspect in the case, from a bus while attempting to flee.