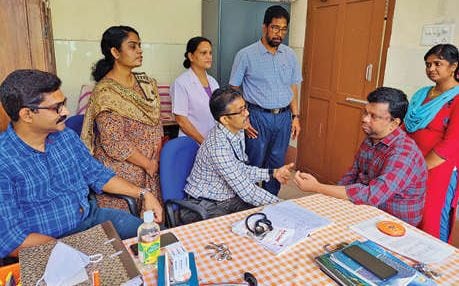 A blister developed on Paul’s body soon turned into a threat to his life by losing over half of his entire skin. Even lying on a bed was painful as his skin got stuck on the bed. However, doctors of the Govt Medical College took up the mission to heal Paul.

A minor sore appeared on his body in January 2021 and it spread to his whole body soon. The doctors identified it as a rare skin disorder, called Pemphigus Vulgaris. His health deteriorated rapidly and he became unable to go to his job.

Though he consulted doctors at many private hospitals, the condition of his skin worsened. Paul sought treatment in the Govt. Medical College on March 11 and the blisters were healed within one and half months. He was discharged from the hospital when new skin appeared on his body.
Paul’s treatment was proceeding under the head of the dermatology department, Dr N Asokan.