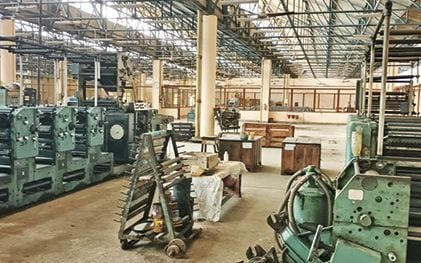 inside view of Government of India Press, Koratty that has been shut down- Foundational Stone of the press

Koratty: The Delhi High Court has dismissed the plea which sought to retain the central government press in Thrissur’s Koratty. The decision comes in the wake of employees belonging to the Koratty unit of Government of India Press expressing willingness to shift to the unit in Maharashtra’s Nashik.

With Delhi HC’s dismissal of the plea, the five-decade old press has ended up as memory. Similarly, the legal fight which spanned for more than four years concluded with an unfavourable verdict. It was in 2017 that the union cabinet decided to merge the Koratty unit with Nashik unit.

The press was started in 1966 on a 100-acre land. At that time there were 300 workers. By 1972, the number of workers rose to 425 working in two shifts. However, now there are only 14 workers. Among them 12 will merge with Nashik unit of press, while the remaining two will merge with Delhi unit of press.

The press was started in Koratty due to the intervention of Panampilly Govinda Menon, former CM of Travancore-Cochin region and renowned Kerala politician. He was a union minister and pushed for the establishment of press for giving more job opportunities for the local people. It was inaugurated by the then union minister of works, housing and urban development, Mehr Chand Khanna. Menon who was known for political interventions also renamed the locality of press under the name of Khanna. Since the inauguration, the locality is known by Khanna Nagar. The place got a post office with the same name tag.

The Kerala Industrial Infrastructure Development park which has been functioning at Koratty was started by taking over the 30-acre land of the press. At present 60 commercial units are working in the camps. With shutting down of the press, small and large size buildings and around 100 quarters can be used for development projects. Meanwhile, when state government, on behalf of KINFRA, approached for 16-acre land for its extension, the union government had rejected the proposal citing the chance of projects from the latter.

Bride and groom run away before marriage causing headache for police, family

World Environment Day: At 81, German citizen in Thrissur continues to clean up pond on his land

Ration outlets to provide more services, 1000 K-Stores to be launched in ...

Gold Smuggling Case: Shaj Kiran, Ibrahim to be questioned; Notice to be ...