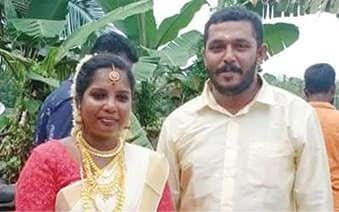 Jyothish and Anitha on their wedding day

Pathanamthitta: Kozhencherry native Anitha, who was forced to carry a six-month-old dead foetus in her womb, had to suffer indescribable torture at the hands of her husband, Jyothish.

The couple’s son, one-year-old Adhidev, was diagnosed with serious heart disorder when he was six months old. The doctors had suggested expert treatment for the boy but Jyothish hid this matter from both families. The boy who is now in critical condition was admitted to SUT Hospital in Thiruvananthapuram on Sunday after his condition worsened.

Police informed that after marrying Anitha on September 27, 2019, Jyothish soon shifted to his wife’s house. He became a drunkard and started splurging the money and gold that Anitha’s family gave as dowry. Meanwhile, a son was born to them. When she got pregnant again soon after, Jyothish forced her to conceal it and perform an abortion. He gave her many traditional medicines for this purpose.

Anitha was taken to the district hospital in Kozhencherry on February 22 and Konni Medical College after that when she developed severe abdominal pain. The doctors informed Jyothish that the foetus with a growth of over 27 weeks had died and that it should be removed through surgery immediately. But he took her home instead and told her to keep mum about it.

Anitha’s health deteriorated due to infection and she was admitted to SUT hospital in Thiruvananthapuram on May 19 by her family. The foetus was removed from her womb first and her uterus was removed later. However, Anitha succumbed to the infection on June 28.