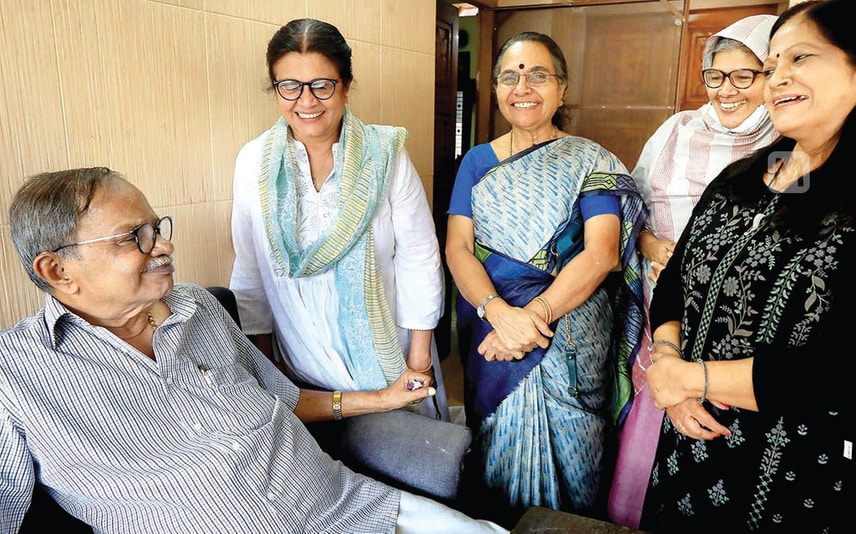 When daughters of MT Vasudevan Nair's friends arrived at his home to wish on his birthday | Photo: KK Sathosh

Kozhikode: Daughters of the legendary Malayalam writers arrived at the residence of another exceptional writer, to bestow him with a gift when he was about to enter the 90th year of his life. MT Vasudevan Nair was overwhelmed by the visit of the daughters of his bosom friends. NP Mohammed’s daughter Jasmine, Vaikom Muhammad Basheer’s daughter Shahina, Thikkodiyan’s daughter Pushpa and SK Pottekkatt’s daughter Sumitra Jayaprakash were the daughters who arrived at MT’s residence ‘Sithara’ here on Monday.

The birthday present was a blue shirt and a dhoti with a brown line on its borders. Though Punathil Kunjabdulla’s daughter Nasima was also invited, she could not arrive due to fever.

Shahina recollected that her father Basheer had spent significant time with MT, SK, and Thikkodiyan at SK Pottekkatt’s home ‘Chandrakantham’. They were together from the period when Basheer shifted to Kozhikode for writing a play for the Kozhikode Kendra Kala Samiti from Thalayolaparambu. NP Mohammed usually left before night falls. During these days, Basheer’s mother had sent his brother with a message requesting the writers to take initiative to marry off Basheer. And they found Fabi for him.

NP Mohammed’s daughter Jasmine recollected that her wedding saree was a gift from MT and Sumitra said her father SK Pottekkatt used to call MT ‘the gem of Malayalam’.

Though Thikkodiyan was 17 years elder than MT, a deep friendship existed between them, recalled Pushpa. MT used to visit Thikkodiyan often when the latter was alive, she added.

MT will turn 89 on July 15. The daughters of his friends arrived to extend birthday greetings to him two days before, knowing that MT will not be in Kozhikode on his birthday.

Mathrubhumi and its efforts to intertwine literature with freedom struggle